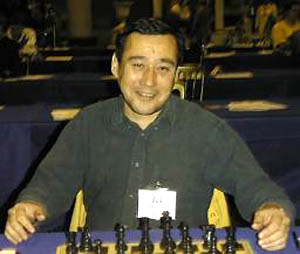 Grandmaster Mark Hebden is a legend on the UK weekend circuit and is absolutely ruthless at beating weaker opponents. With nerves of steel, Mark specializes with the Black pieces in complex and difficult to analyze openings such as the Kings Indian.  He tends to play quiet systems as white, like the Colle in QP openings, or closed lines against the Sicilian.
Mark L Hebden was born on the 15th of February 1958 in Leicester, England. He was awarded the IM title in 1982 and the GM title in 1992
Hebden was British Rapidplay Chess Champion in 1990, 1994, 2001, 2005 and 2009.  He was equal first in four editions of the very strong Cappelle-la-Grande Open: 1989, 1990, 1995 and 1997.  In 2001 he tied for 1st-4th with Yannick Pelletier, Tamaz Gelashvili and Vladimir Tukmakov in the 9th Neuchâtel Open and in 2009/10 tied for 1st-4th with Andrei Istrăţescu, Romain Edouard and David Howell in the Hastings International Chess Congress.
Mark is also a well known author and a very respected trainer.  Did I forget to mention that Mark is also one of the nicest people you would ever meet?

BELOW ARE 10 EXAMPLES OF HEBDEN’S
TACTICAL SKILLS
Solutions  http://www.wtharvey.com/hebd.html      White to move in each case, except where written otherwise.