gm  Korchnoi,V
An oldie but goodie!  The year is 1964 (remember the Beatles?!) and the following position arose after move 30  in a Kiev tournament.  Korchnoi–contrary to habit–had just sacrificed a piece to open the Black King to an attack by his Queen, Rook and Knight…
WHITE TO PLAY AND MATE IN 4 MOVES!

Legendary grandmaster Viktor Korchnoi (born St.Petersburg 1931) is , if not the strongest player to have never become world champion, the only grandmaster to have maintained his high level of play into his 80’s.
——————————————————
2.
Kolvig,B

gm  Larsen,B
Copenhagen, 1960.  A young Bent Larsen is playing his favourite Acelerated Dragon in reverse.  The White Knight is dangling on h4….but Larsen’s intuition tells him to press on with his attack.
WHITE TO PLAY AND WIN!

‘The Great Dane’ was born in Denmark in 1935. He went on to become one of the strongest non-Russians in the second half of the 20th century.  Winner of countless top-level tournaments, Larsen came to a hair of winning the world championhip.  I believe that diabetes explains why he never reached the summit.  Larsen died just 2 years ago.  We had some long chats about chess…

From Baku, 1961!  Here the open g-file is of critical importance.  But Black seems to have everything undercontrol.  Add to this that Black is attacking the White Bishop on c4.  Seems like White might have overextended…. 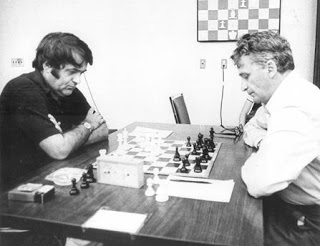 Leonid Shamkovitch was the first grandmaster that I played over the board.  LINK  Born in 1923 in Russia, Leonid emigrated to America in 1975. An author of a number of successfuly books, Shamkovitch had a reputation for being an attacker.

He was interested in staying in Canada and training promising Canadian talents, but the CFC discouraged him.  I played him many times and developed a strong liking for Leonid.  We remained friends until his passing in 2005.
4.

From the 1935 Warsaw Olympiad!  Paul Keres was just a young lad of 19, relatively unknown but with a feverish desire to win at all costs.  Here he gambitted several pawns in the opening for the sake of an advance in development.  His opponent thought Keres was bluffing…so he took everything!   Here Winter is about to castle…
WHITE TO PLAY AND WIN!

Paul Keres, the ”Prince of Chess” was born in Estonia in 1916.  An amazing natural talent, many believe that he was the strongest player to have never become world champion. His achievements are legendary, and different from most great players, there is still much mystery surrounding his chess career.  Unfortunately, Keres died at age 59 on his way home after spending several weeks in Canada.