Lots of tournaments taking place right now and as a result lots of new stuff for my regular 5-second tactics column!  I will be adding more examples as the day progresses.  Good luck!

gm  FEDORCHUK,S
From the tradtional Martinique open that finished just yesterday, with Fedorchuk coming in first ahead of Pelletier (swiss) and Bauer (france).  In the position above White has made no secret of his plan to tear down the fortress in front of the Black monarch.
Black has just played 24…Re6, trying to control the damage, but it is too late for this to be effective.
WHITE TO PLAY AND WIN!
———————————
Some photos from Martique’s prize giving ceremony: 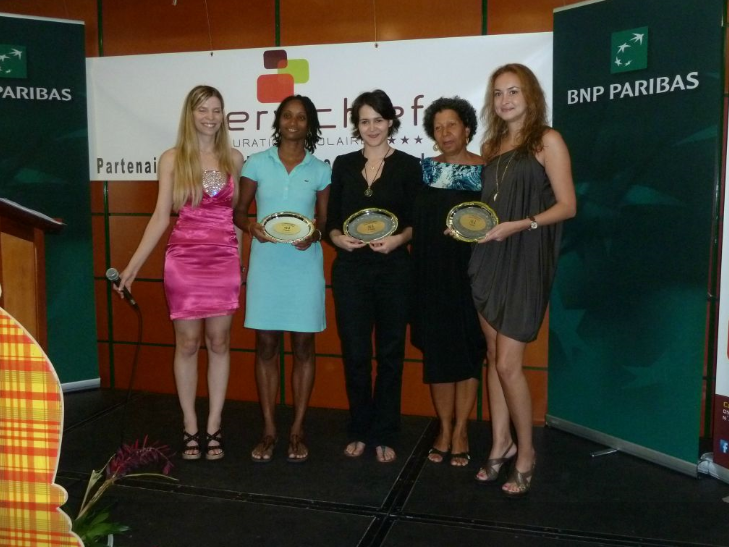 I don’t recognize everyone, but on the left is the very photogenic  (and competent) arbiter Anémone Kulczak.  In the very middle is Marie Boyard. On the far right is Stefanova.

One of the most important encounters in Martinique was between Bauer and Miezis.  Fireworks from start to finish!

gm  BAUER
Position after 6 moves.  Curiously, Miezis is a well known expert on the English Opening but this did not seem to concern the unorthodox Bauer!  It is , therefore, not surprising that the game quickly deviates from more traditional approaches.
7.Bxc6+!?

Shades of Nimzovitch, Batman!
The late Bent Larsen played this idea often in his day.  The idea is very dynamic and hypermodern: White hopes that Black’s centre pawns will soon become  targets for his pieces.  I have played this idea several times, also, but not with very good results, mostly because I underestimated the Bishop pair that White has given Black.  HOWEVER, I believe that White’s idea is completely sound and leads to unbalanced and difficult to evaluate positions.  Definitely important considerations when one wants to win at all costs.
THERE FOLLOWED:
7…bxc6 8.b3 h5 9.h3 h4!? 10.g4 f5 11.f3 Nf6 12.e3 Qe7 13.Bb2 Bh6 14.O-O-O

Here Black should probably just castle and did in for a tough fight ahead.
14…d5?!

Black provokes a crisis in the centre, a very risky policy when your King is still uncastled and when most of the pieces are still on their original squares.  Black threatens d4 embarrassing the White King.  The next moves are more or less forced:
15.g5! Bxg5 16.f4! Bh6 17.Nf3

Now probably the most cautious course of play is 17…Pxf4  18.Pxf4  O-O!  19.Rhg1  Kh7, though there is no doubt that White has excellent compensation for his pawn sacrifice.  HOWEVER, Miezis continues in his provocative style:
17…d4!?

Another crisis in the centre!
Here White can call into doubt Black’s risky play with the quiet retreat 18.Ne2!.  Probably Bauer did not like 18…Pxe3  19.Qxe3  Pxf4, but White has the very strong 20.Qg1! with dangerous threats, including Re1.  It is not clear what Black would have done in that case.  Note also that 18…e4 is strongly met by 19.Ne5
INSTEAD, Bauer–true to his style–decides to make a speculative piece sacrifice for purely positional compensation.  It must be admitted that while his solution to the above position might not be the very best, it is both creative and poses difficult practical problems for his opponent.  IN SUCH positions Bauer is like a fish in water and has earned a fearsome reputation as an attacking player!
18.Nxe5!? dxc3 19.Qxc3

A very unclear position!  Who stands better? Both sides will be required to play precisely.
White’s pressure along the a1-h8 diagonal is permanent and he intends to follow up with Rg1 followed by doubling on the file.  The Black King will have no safe refuge.  And let us not forget about pawns: Black’s pawns are scattered, crippled and easy targets for White’s pieces.
THAT BEING SAID,  some wise chess observer once noted that a piece is a piece!  I think the game must be evaluated as ”unclear” and the game continuation proved this.  HOWEVER, probably short of time, Miezis later made a serious error and Bauer was given an opportunity to pounce on his opponent:
POSITION AFTER 36 MOVES

Black had just taken a pawn on d4
WHITE TO PLAY AND WIN!

I love the expression on her face!  Sheer determination and mental toughness…like she is saying ”I will get you next time!”
Share