The start of another week!  I head back to my home in Portugal later this evening, a bit tired after a very active month.  Sants was a reasonable tournament for me.  I gained some elo points, but overall this past summer I drop back some 15 to 20 points.  It is dangerous to play lower rated players: in the past 3 events I played, I won 16 games but lost 6.  The 6 draws did not help either…
A coffee mug can be a deadly weapon?
Hard to believe, but yes!  This story caught my interest just a few days ago:
”Lois Goodman, a professional tennis referee, was taken to Los Angeles yesterday to face murder charges. She is accused of beating her husband to death with a coffee mug. He was 80-years-old at time of his death. Goodman, who is currently 70 years old, was arrested in Manhattan, N.Y., while in town working as a line judge. Her husband died on April 17, and an arrest warrant was issued for Goodman on Aug. 14.”
But still, how can you kill someone with a coffee mug?  It apparently broke into pieces and then the wife repeated stabbed the husband with the sharp bits!  Ugh….

There by answering the question as to whether landing on the Moon was the fountain of youth.  I can still remember like it was yesterday watching the live video back in July 1969  as Apollo 11’s commander crawled out of his spacecraft and put his feet on the Moon.  I never looked at the Moon the same way again…
I suppose this is the most shocking news for me this past weekend.  Not so much that we are all getting older (that is easy enough to accept) but  since that historic day in July 1969 the world has failed to live up to the hopes and aspirations of the men who made it all possible in the first place.  Infact, the last time we visited the Moon was in 1972, the super powers preferring to put their financial resources into more earthly (and deadly) games…just a fraction of the original size of NASA’s Apollo budget is even involved in the Mars endeavours…what is needed is a radical change in political priorities.
————————————————-
[youtube http://www.youtube.com/watch?v=HCt1BwWE2gA]

Congrats to Eric for a great result in the  Isthmia  International Open!  Keep up the good work.  This result should push his elo over 2500

Link
Apparently some 160-”something” teams are registered in the Open (mens) Olympiad and a correspondingly smaller number in the female group.  The ”something” exists because some countries fail to arrive.  The Canadian mens team is ranked number 53 going in  link…I am not certain where the female team ranks.  Readers who would like to know my prediction of the Canadian team’s most likely placing already know. because I published it earlier.

click on to enlarge
Link
Can this team do better than 75th?  We will soon find out! 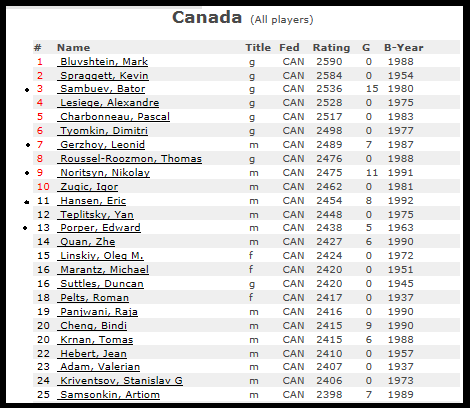 Canada’s top players at the time of the Selection process finished.  Notice that only one of Canada’s gms is playing. While the CFC as an organization is un-officially indifferent to the quality of its national team, in private the CFC executive members openly celebrate mediocrity and amateurism!  This year’s Canadian Open could not count on the participation of even one of its grandmasters.
The Olympiad boasts 32 players rated 2700 and above; and 111 players rated 2600 and above.  The big favourites are China, Russia, Ukraine, and Armenia.  Dark horses include France, England, Germany, the USA and Israel.
Several of my Portuguese students are participating on the Portuguese teams, including 16-year old Maria Ines Oliveira.  I was asked to help select the players, but because of a potential conflict of interest I played only a minor role on the overall selection.  I was also asked to accompany the Portuguese delegation as a trainer/captain, but my playing committments did not allow for much manoeuvring….
BESIDES, I am at heart a chess player.  It only seems natural to me that if I go to an Olympiad then I will go as a player!  (And we all know that is not going to happen before quite a few of the current CFC leadership either are run off or die …) 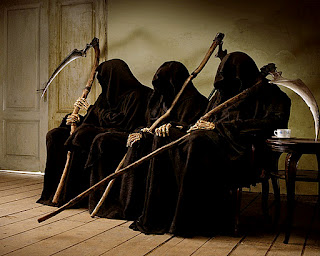