I have been busy this past couple of days,  Saturday and Sunday, training members of the chess club (AAC) in Coimbra of which I am a member. One of Portugal’s oldest chess clubs, the AAC is in reality  a university association of clubs–of which chess is one of its founding members.

My readers might remember that this chess club won the  Portuguese Team Championship this past  summer in the city of Porto.  Much as with the truly international flavour of the university in Coimbra, my team was composed mostly of players from abroad, to be prcise: Polish.  However, the AAC also entered teams in the 2nd and 3rd divisions, 100% of which was composed of Portuguese players.  These teams serve as ”farm” teams for the 1st division team, atleast in theory.
The actual AAC chess club is open 7-days a week, offering a wide variety of activities such as tournaments and group training.  Under the influence of the director of the club–the indefatigable Bruno Pais–the club is open not just to members of the university but also to players of all ages and backgrounds.  Ages vary between 10 years old to 70 years old!  And sometimes less…
I  give training sessions once a month, usually on a weekend.  This past weekend I was surprised to see a 5-year old girl attend my beginners training-session!  It is quite unusual to see this anywhere, but what can I say: the girl loves to play chess and convinced her mother to bring her to the club!  When the class ended, some 3 hours later, the mother had problems to convince her daughter to come home (!), she did not want to leave!
I am not sure what the best age is to introduce a child to chess, but what we see a lot these days is a general trend of the  lowering of age with respect to most everything.  Somewhere along the food chain we find children reaching master and grandmaster level of play while just entering their teens!

Capablanca (right) learned chess at age 4.  Here he is playing his father!
BUT  the important thing is that the child enjoys playing.  If this is the case, then any age is the right age to start playing.  This past weekend made me realize something that I already knew but tend to forget sometimes– that chess is one of the few activities where age is not a determinant factor and as such grandchildren and grandparents can both enjoy and compete with each other. 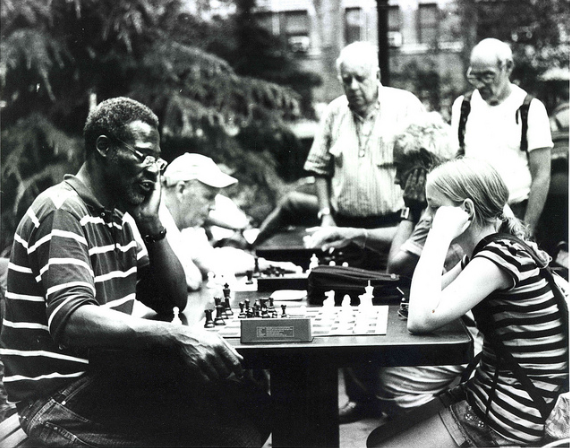 Several years ago some bright soul travelled to the annual general meeting (AGM)  of the CFC and wondered if it could not all be done on the net rather than face to face. Canada is a big country, after all, and such annual treks cost money that is not re-imbursed by the CFC nor is it tax deductible.  He then started to canvas governors and members of the CFC and found that while there was limited support for his idea, the thing that appealed to most is the savings on money and travel.
OFCOURSE, there are obvious alternatives to conducting federation business face to face–such as conference calls— but the problem is that these also cost money and require the simultaneous presence of governors at pre-determined times.
The bright soul  thought a bit more on this and then jumped:  he found a super low-cost solution that avoided even the conference calls: using an old fashion message board!  This idea really took off (how I have no idea)  and was soon implemented by the wise men of the CFC, replacing the AGMs that had been taking place annually.

However, there was a little problem that soon became evident…
Posting on a message board is a lot like sending out company memos to all of its employees and then hoping that someone will actually take them serious enough to reply and then send out their own memo(s)….soon–if you are lucky– you even  start to feel you need an anti-spam program!
Sometimes a memo is just  too one-dimensional and  not nearly  sophisticated enough  to  tackle important issues.  AS A RESULT, the level of problem-solving in the online meetings of the CFC has been lower than the face to face AGMs.  I was shocked by what I saw when I started following how things were going (I am not a governor).
————————————————————————-

Case in point is the latest online meeting that started sometime last week and ends tonight. Two very tough and important issues were under consideration: the first being what to do with the failing CFC ezine  and the second was (even more important) to dismantle  the current governorship of the CFC and replace it with a permanent 9-member board of directors.
The first issue neglected any input from what the actual CFC membership thought on the subject, nor did it consider all of the valid alternatives, while the second issue was not properly presented and–more over– the movers tried to cut-short any real discussion by quickly shoving it down the governors’ throats (or ramming it up their ass, depending on your point of view) and insisting that the issue be decided immediately.
Some governors suggested tabling the issue pending more time to consider the consequences involved in the issue, but this was shot down by the CFC president. Another governor thought that this process was lacking in democratic principles,  and he was ignored by everybody, including the prez.

ANOTHER shortcoming, and one that is incredible in my opinion, is that when the time came to actually vote on these issues (the governors were given several days for this) the movers of the motions were still allowed to post messages , trying to influence voters!
AND IF THAT IS NOT ENOUGH, as the voting took place the undecided voters could follow the EXACT count of votes that had already been cast up to that moment!

Click on to enlarge
I mean, really, if the United Nations were to have witnessed such a practice in some hotspot in the third world, then the entire election would have been labelled a travesty.  A fraud, even, and there would have been calls for invalidating the entire process.
And they would have been right…