I just heard the news this afternoon.  It produced one of those experiences…you know the type, it leaves you a bit shocked and not know what to do or say for a few moments….I had always been under the impression that ”Rosie the riveter” was long dead!  But no: she died the day after Xmas from complications connected to severe arthritis.  I am not sure if I should be saddened or not!
Rosie the Riveter is a cultural icon of the United States, representing the American women who worked in factories during World War II, many of whom worked in the manufacturing plants that produced munitions and war supplies.  The poster above inspired 11 million women to answer the call.  These women sometimes took entirely new jobs replacing the male workers who were in the military. The character later became considered a feminist icon in the US.

Geraldine Hoff Doyle; the real life inspiration for the poster
“In 1942, Pittsburgh artist J. Howard Miller was hired by the Westinghouse Company’s War Production Coordinating Committee to create a series of posters for the war effort. One of these posters became the famous “We Can Do It!” image — an image that in later years would also become “Rosie the Riveter,” though not intended at its creation. Miller based his “We Can Do It!” poster on a United Press photograph taken of Lansing, Michigan, factory worker Geraldine Doyle.  Doyle died December 26, 2010 at the age of 86. Its intent was to help recruit women to join the work force. At the time of the poster’s release the name “Rosie” was not associated with the image. The poster – one of many in Miller’s Westinghouse series – was not initially seen much beyond one Midwest Westinghouse factory where it was displayed for two weeks in February 1942. It was only later, around the 1970s and 1980s, that the Miller poster was rediscovered and became famous as ‘Rosie The Riveter.'”  (wiki)
Apparently Geraldine only realized that her photo was the inspiration for the poster in the 1980’s!  In one of those weird twists of fate, she lasted at the job (in the photo) only 2 short weeks: she quit when she realized that the job was dangerous and an accident might cripple her hands (she was a gifted cello player by some accounts).   Soon after quitting work as a metal presser, Geraldine Hoff met and married dentist Leo Doyle, to whom she remained married until his death in early 2010.

Millions of copies of the poster were sold.  A stamp was even made of it!
As the feminist movement of the 70’s and 80’s gained momentum, this iconic image became representative of the new woman! 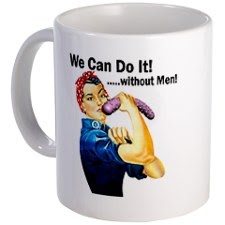 And of course, everyone wanted  a piece of the action : 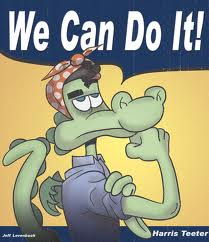