“In my match with Tigran Petrosian in 1966, I was the stronger player but lost the match…It was during this match that while I was taking a walk in the streets of Moscow, I accidentally ran into Botvinnik. You could always recognize Botvinnik because he never moves his arms when he walks! I said, ‘Good morning’ to which he sternly replied, ‘Good morning. Do you always predict your opponent’s moves?’ I thought about this and answered, ‘No’, to which Botvinnik said, ‘Humph!’ and walked away.”
“It was then that I realized that Botvinnik had lost his 1963 match to Petrosian because he was also unable to predict Petrosian’s moves. Upon studying Petrosian, I noticed that when he smugly strutted about the stage like Napoleon Bonaparte, this was when he was most worried about his position! And when he stepped lightly, this was when he was ready to strike like a tiger. Therefore, in the 1969 match, I was better able to predict his moves and won the World Championship.” 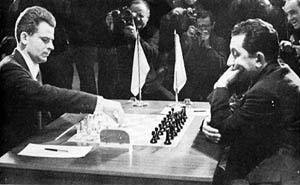 ”…I came to the conclusion that the World Champion, for all his great positional mastery, was not a player of a strict, classical profile. His style, directed towards limiting the opponent’s possibilities, is unique and, particularly in match play, extraordinarily effective. It is not accidental that Petrosian is a phenomenal match player. All the same, his unsurpassed skill at manoeuvring and tacking is sometimes dictated not only by the requirements of the position but rather by prophylactic tasks”.
POSITION AFTER BLACK’S 14th MOVE
TIGRAN PETROSIAN

SPASSKY
I was just a teenager when I first saw this game.  Who couldn’t be impressed by Spassky’s forceful and imaginative play?  Spassky castled long and quickly completed his development.  In this position many masters would play 15.e5 or 15.f5, both good moves, but Spassky found another idea and this lead to one of the most decisive wins ever in a world championship match.
15.g4!

Spassky was the most feared attacker of his generation.  Many think that Tal was the best attacker–and this might be true–but when Spassky attacked his opponents would often tremble!  In the 1972 match with Bobby Fischer, Spassky tried desperately in the second half to catch up his score, trying to pummel Fischer game after game.  Fischer eventually gave up his favourite Najdorf–even though his score with it was quite acceptable–because he felt himself cracking under the strain of defending against the Russian.
Here in this game Spassky’s idea is quite clear: play g5 and open lines because of the weakness on h6.  Petrosian really has no choice but to accept the pawn sacrifice, even though he loses time in the process.  Spassky was then able to shift his Rooks over to the Kingside
POSITION AFTER BLACK’S 20th MOVE

Black is holding out, all of White’s threats at present being neutralized.  Now , however, Spassky goes in for the kill.
21.e5! pxp 22.Ne4!!

White threatens to take on f6 and there is not much to do to prevent White’s attack from gaining momentum.  If Black takes the Knight on e4 then White mates with Rxf8ch followed by taking on g7.  Petrosian played the desperate 22…Nh5 but lasted just 2 more moves.
When Petrosian resigned the audience gave a thunderous ovation to Spassky.  Imagine 2,000 chess crazed spectators jumping to their feet !