Maria Schneider ( Marie Christine Gelen) was born March 27,1952 in Paris and died today in Paris of cancer .  She was 58 years old.  Many of my generation still remember her as the 19-year old nymph to Marlon Brando in the 1972 film ‘Last Tango in Paris’.  She starred in 50 films during her career. 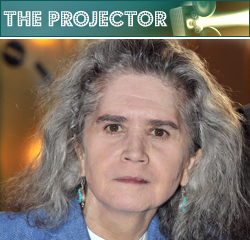 One of Schneider’s last photos
[youtube http://www.youtube.com/watch?v=3x4UOsLC0OE]
Last Tango in Paris was directed by Bernardo Bertolucci and created a sensation at the time of its release (automn 1972).  Some theatres where the film was shown received bomb threats.  Others had protestors picketing outside.  Bertolucci was actually taken to court for obscentity and sentenced to 4 months in prison!

The film stereotyped her as a sex-bomb, something that she had great difficulty shaking for the rest of her life.
SHE WILL BE MISSED!