A gentleman’s gentleman, Lothar Schmid passed away this weekend in Bamberg at the age of 85.  Perhaps best known as the arbiter of the historic 1972 Fischer vs Spassky match (as well as the revenge match in 1992) Schmid was also a world class player in his own right, having won both the GM-title and the ICCF GM-title  way back in 1959 when most of my readers were not yet even born!

Born in Dresden, Schmid played on the West German national team not less than 11 times between 1950 and 1974, winning 4 silver medals as well as 2 bronze medals. In correspondence  chess he came in second (by a mere half-point)  in the 1956-1959 World Correspondence Championship, behind the Russian grandmaster Ragozin.

Schmid congratulating Fischer on becoming World Champion in 1972!
Lothar Schmid also was chief arbiter at the 1971 Fischer vs Petrosian match, the 1977 Korchnoi vs Polugaevsky match, the 1978 Karpov vs Korchnoi match and the 1986 Karpov vs Kasparov match. 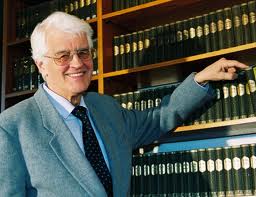 ”It’s housed in 7 rooms on the top 2 floors of his house in Bamberg, Germany. On the ground floor you can find his publishing business (Karl May-Verlag) and his living quarters are on the 1st floor.
He started collecting in the 1950s, when he was offered the personal library of Rogmann. Since then, he has spent his time buying up other people’s libraries, with over 50 other collections including that of Tarrasch!
It’s often said that the collection looks chaotic, but Lothar, and only Lothar, knows where to find everything!”  LINK
He owned, for example, one of only 10 surviving copies of the first printed book about chess, Luis Lucena’s Repetition of Love and the Art of Playing Chess (Repetición de Amores y Arte de Ajedrez), published in Salamanca in 1497.

He also possessed all eight editions of Questo libro e da imparare giocare a scachi, published in Rome in 1512 by the Portuguese apothecary Pedro Damiano (1470-1544). ( LINK )

LINK   Schmid, Petrosian and Estrin 1968
Grandmaster Lothar Schmid was a gifted positional player with a fine feel for tactics.  Though his professional obligations did not allow him to travel and play as much as some of the other grandmasters of his time, Lothar crossed swords with virtually all the world champions of the latter part of the 20-th century, including Euwe, Botvinnik, Smyslov, Tal, Petrosian, and Spassky.
He has played many famous games that have been published around the world, and I have found his classical style of playing to be very useful for training and teaching purposes. As White he had a fondness for 1.e4, while as Black he specialized in counterattacking systems such as the Benoni (Schmid Benoni!) and the Alekhine Defence and French Defence.  His games did much to enrich the theory of these openings.    Below is just a small sample of his efforts.  ENJOY!
WELZ

LOTHAR SCHMID
Radebeul, 1945.  Black had just played  18…Bd4.  The uncastled position of the Black monarch gives rise to a clever tactic that the young Schmid quickly pounces upon…
WHITE TO PLAY AND WIN!
—————————————-

LOTHAR SCHMID
Germany, 1951.  Position after 13 moves.  The Black King has not yet castled and this proves to be his undoing…as usual, Schmid is quick with the execution!
WHITE TO PLAY AND WIN!
————————————–
LOTHAR SCHMID

O’HANLON,John
SouthSea (england) 1951.  Black had just given check to the White King.  Which side should the monarch hide?
Correct is now to play 19.Kf1,  with a complex and evenly balanced game in progress.  INSTEAD, White played what seemed at first  to be a safer course:
19.Kh1?

That this move loses is , in itself, instructive.  BUT  the manner in which Schmid presses home his opportunity is nothing short of brilliant!
19…Ne4!

gm  LOTHAR SCHMID
Bamberg, 1968, perhaps Schmid’s best tournament result (2nd place behind Keres; tied with world champion Petrosian).  Position after 15 moves.  The opening has been sloppily played by the Finnish grandmaster, but still–you would not expect the game to end so quickly!
WHITE TO PLAY AND WIN!
——————————————-
ZIRNGIBL

LOTHAR SCHMID
Dusseldorf, 1951.  Something has gone wrong in the opening for the Black pieces, with his King floating around.  He had just played 23…h6, with the clear intention of hiding on h7.
WHITE TO PLAY AND WIN!
————————————

LOTHAR SCHMID
Oberhausen, 1961.  A sharp variation of the Sicilian where Black had just a move before pushed …d5 and then …Qb6, fighting for the initiative.  Schmid was very adept in handling such complicated games and here he proves, beyond a doubt,  to Black’s misfortune that White is infact the master of the position!  One of Schmid’s best efforts!
WHAT IS WHITE’S BEST COURSE OF ACTION?

LOTHAR SCHMID
Stockholm, 1952.  I have not been able to confirm that this was from an actual tournament game –perhaps it was just an off-hand game– as the official tournament record shows that Schmid was not a participant.  PERHAPS one of my readers will be able to shed some light on this…
HOWEVER,  the finish to this game is so remarkable that I can not resist but to include it!  Schmid has sacrificed a piece to expose and attack the Black monarch.  Petrosian’s King has fled all the way to the Queenside where it finally appears to have found a safe-haven…ALMOST!
WHITE TO PLAY AND FORCE MATE!
———————————————-
Share