A blog entry dated April 10, 2009 (link) took a look –at times playful–at what has become of some of my old chess-friends that I met in the Montreal chess scene, but who seemed (at the time) to have simply dropped off the face of the earth.  Since then Leon Piasetski (whom I  just assumed had been kidnapped by pirates in the South China Sea) has re-appeared– in good health and with all of his body parts–and we have met several times at tournaments in Spain and Portugal. But the whereabouts of Alex Lesiege and Camille Coudari are still mysteries…
Here is that part of the April 10 blog that refers to my old chess-friend Camille:

”I first met Camille in 1970 before I started to play in rated tournaments. I showed up at some local tournament to watch my older brother Jim play, and Camille was the star of the tournament. I believe he was a rated master at the time. I had never seen a master before, so I payed close attention to his games, his mannerisms and especially his comments afterwards.

It was not the greatest tournament for Camille, as he lost to Drew Stohl in a complex game where Drew quickly outplayed Coudari, but Coudari got counterplay by sacrificing a piece for several pawns. In the end, it was not enough. Coudari was annoyed with himself, but he showed considerable class in the analysis, though it did get a bit hot when Drew wanted Camille to admit that his position was lost, and Camille refused steadfastly (I have since learned that stubborness is an important asset in chess!)

Over the years Camille developed a reputation for being a difficult person, getting into conflicts with numerous players in Montreal, myself included. However, none of it was serious. Coudari tried to become a GM after he got his IM title, played in some US tournaments, but did not get any good results. I think he lost interest in chess around 1980. In 1981 he worked with the Quebec film director, Gilles Carle, to produce a really wonderful film about chess (jouez sa vie).

The late Gilles Carle was the most famous Quebec Film Director of his generation. In the scandal in 1987 involving the CFC , Gilles was very helpfull to me with advice and moral support. He later became President of the Kevin Spraggett Foundation for Chess, which gave a lot of money to Lesiege’s early career.

And then Coudari began to get involved in that industry, apparently doing research, writing and other things. I have no idea what he has done since that time. Google searches are useless.

The last time I saw Camille was by chance in Sevilla 1997, when I was seconding Alexi Shirov at the Dos Hermanas Super Tournament (Dos Hermanas is right next to Sevilla). Camille was with his wife Jill and daughter Sevilla (yes! named after the city which apparently Camille used to spend months at a time). We had a pleasant chat, and that was the last time I saw him. He seems to have disappeared completely. Not even Google can find him…though Hugh Brodie assures me that he is alive and well.”

HOWEVER, it turns out that Camille is merely in hiding from the chess scene and his old friends and contacts. He has a daughter, Sevilla, who is today about 20 years old and is very gifted musically. 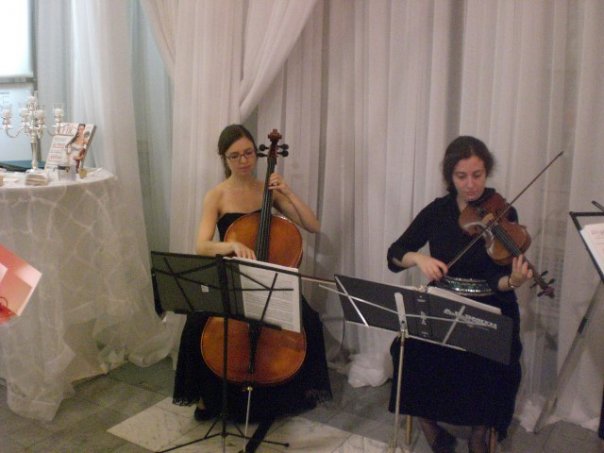 Cellist Catherin Little and Violinist Sevilla Coudari (right)  performing at the Elegant Wedding Show at Le Hotel Windsor in Montreal   link
Sevilla has won several awards for her violin playing and is an excellent writer of lyrics for musicals (The Quest for Atlantis). I found the following wonderful youtube examples of her lyrics: enjoy!