Four rounds have been played so far and 3 remain.  Anand and McShane share first place with 2 wins and 2 draws each. Short controls the basement with just one draw (that is a big surprise!) while the least experienced player of the 8 man tournament, David Howell, is in a well deserved penultimate place with 2 draws and 2 losses. Wonderkid Carlsen refuses to draw: he has 2 wins and 2 losses, while Kramnik is doing very respectably with 2 wins , a loss and a draw.  My pre-tournament pick, Mickey Adams, has so far failed to live up to expectations, and is at 50% with 1 win, 1 loss and 2 draws, as is the American star Nakamura. 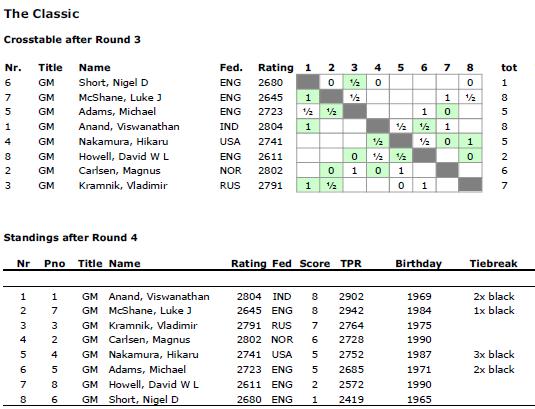 The spectators no doubt are enjoying the tournament as there have been quite a few decisive games.  However, surprisingly few games worthy of being published have been seen so far.  It seems that one side gets an edge and then throws it away or else one or both of the players overlook relatively simple tactics and then find themselves looking silly.

Entertaining, but no cigar (!) as my old trainer Andras Adorjan used to scold me…
Perhaps the players are not so used to the classic time control:  40/2, 20/1, g/15’+30″, or perhaps it is almost the end of the year and many of the participants are near burn-out after a very busy year.
In anycase, the spectators are the winners and with 3 rounds to go still anything is possible.  Readers can see some great photos at this link:
http://raymorris-hill.smugmug.com/Sports/Chess/London-Chess/14970362_99rGa#1120797496_jN3P8
SOME SNAPSHOTS

Friday’s key matchup between Anand and Carlsen saw both players handle the media-pressure in uncertain ways.  First Anand, as White, found himself thrown onto the defensive in his favourite Spanish game, only to see the Norwegian prodigy stumble horribly with some unforced tactical errors:

GM ANAND
Anand has decided that rather than defend passively it would be better to play actively.  So Black finds himself with the Bishop pair and a potentially dangerous passed a-pawn, but has to contend with some dangerous tactical shots over on the Kingside.  The White Knight on f5, especially, seems always to be threatening taking on g7 or going to h6 ripping open the long diagonal (b2-h8).
However, at this level of competition, one would not expect a player like Carlsen to fall for any of Anand’s tricks.  According to the experts, Black should cold bloodily play 24…Nc5! and after 25.Nh6ch!? Kh8 26.Qf5 uncork the classy  26…Qe4!, forcing an ending with reasonable winning chances for Black.
Instead, Carlsen played the wishy-washy and uncertain
24… Be4?! and was not happy after the obvious 25. Qd4 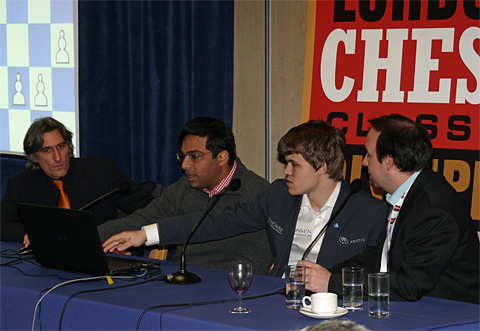 Carlsen was not happy with his 24th move, and blamed it on his subsequent problems.
Now Carlsen really must play precisely in order to avoid becoming much worse: 25… Qe6!? 26. Ncd6 (26. Nxg7? Qxc4) 26… Rb8!? and it appears that everything is under control.
Instead, Carlsen erred with
25… Bxf5?!  and found himself worse after the pretty 26. Nd6!

It is hard to say what Carlsen missed here.  The Knight attacks all of Black’s pieces, and can not be taken because of the mate on g7.  From this point onward Carlsen is fighting for his life…
26… Qd8 27. Nxf5

Now Anand has serious threats! One of them is 28.Nh6ch!, so Black decides wisely to close the long diagonal

So White is building up strong pressure.  Black should now try 28…Rc7 (defending the Knight) and hang tough.  Carlsen’s game would still be  playable.  HOWEVER, now comes an incredible BLUNDER from the former number 1:
28… Rc2??

Sometimes it is amazing how well Carlsen can play, and at other times it is hard to believe that he ever reached number 1 position in the world rankings!  Carlsen’s move loses outright to a simple tactic that has been in the air for a long time (did he forget about it?)
29. Nh6! gxh6 30. Qg4!

Kramnik played what was probably the best game of the round against David Howell.  I always like Kramnik games: he never gets too flashy and always has his two feet on the ground, something that reminds me of the great Capablanca.  In his games he is always satisfied with a small positional plus, not minding having to play 80 or 90 moves inorder to try to convert his chances.
Today I very much liked his 28th move (28.Kc3!), which voluntarily put his King onto the long diagonal (a1-h8) seemingly defying the Black Bishop on g7 to do its worse!
GM HOWELL

GM KRAMNIK
None of the tactics work for Black: the f5 move would turn out working against Black, as the reader can demonstrate easily enough for himself after 29.gxf5! and 30.Ng5!.  Perhaps Black should try to surprising 28…Rxd5!?! as an attempt to mix things up…
Instead, Howell did not seem to really know what to do after Kramnik’s amazing King move and soon allowed his opponent to simplify to an ending where , despite material equality, it is very unlikely that Black can hold the game in the long run:
POSITION AFTER WHITE’S 36th MOVE 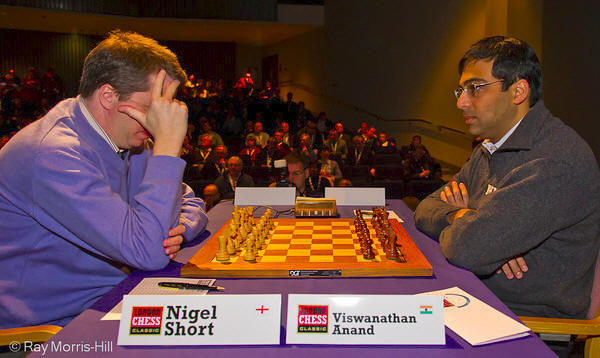 Today (Saturday, 11 of December) happened to be Anand’s birthday and he was given a very nice present by the English former-superstar. Actually, both players played the first part of the game very imprecisely and I am certain that both will quickly want to forget about it!  However, at move 35 the position seemed to be relatively balanced, with neither side having any real chances:
GM ANAND

GM SHORT
Here Short’s active Rook on the 7th rank keeps Anand busy and prevents him from getting in an annoying …Nc5 anytime soon.  Probably Short should just seek simplification with 35.Rf7 (…Rf8) and then offer a draw soon afterwards.
INSTEAD, what happened next is really incredible:  Short–who had once played for the World Championship in his younger days–must have thought that he saw a mate (!) and decided to go va banque and sac the house:
35. Ng5?? Nxg5 36. fxg5 hxg5 37. Bxg5?? Bxg5 38. Qe2

Short must have thought that there was no defence to the threatened 39.Qh5 ch and mate soon afterwards, but when Anand played the obvious 38…Qd6! (with the idea to meeting 39.Qh5 with …Qh6, defending everything and remaining a piece up) Short must have fallen off of his chair!  Instead of resigning, Nigel decided to punish himself by playing out to mate, which took place surprisingly soon after!

Nigel and Vishy at the postgame press conference.  Nigel–already with a glass of wine close by–has played some pretty horrible chess so far this tournament, something very unexpected from such a classy player.  No doubt Short already regrets having accepted to play in the tournament, but how could he refuse such an invitation when the tournament is almost in his own backyard?

Luke McShane’s steady performance has been enough to play for 1st prize!

The game between Adams and Luke was a bit strange.  Adams, with the Black pieces, emerged from the opening with a slight positional advantage, but he found it difficult to increase his edge because of some resourceful play by McShane.  Especially, the presence of opposite coloured Bishops made Luke’s job easier than one would expect.

In anycase, Adams likes to play such positons where he is slightly better!  Surprisingly, he trapped himself when he placed his Queen and Rook on the Queenside (position below), probably thinking that White would have to passively defend his f-pawn with 31.Rf1…INSTEAD, Luke uncorked the really cute 31.Bd5!! (the Rook on e8 is undefended) and Adams could find nothing better than to simplify to an ending where probably White is a bit better, though a draw was soon reached.