From a tournament inChorzow, Poland earlier this year.  Position after 25 moves.  Black had just played 25…Qg5, threatening to take on f2, devastating the White defences, especially as g2 is a hot point, often mate!.   If now 26.Kh2 Black continues–as planned–with 26…Rxf2! when White can resign.  INSTEAD, White found what is , relatively, the best defence under the circumstances: 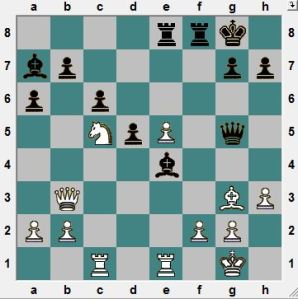 Black must have felt that White’s last move solved his problems, as he now simplified with 26…BxN (?) 27.RxN  Rf7!?, when the game is about even (it was eventually drawn in more than 70 moves!

INSTEAD, BLACK CAN WIN BY TAKING ON F2!

Your task is to calculate accurately and show why White is defenceless!  GOOD LUCK!