Some shocking news came to me this past Friday evening while watching television with my wife: apparently the legendary Viktor Korchnoi ‘s health had deteriorated recently and he is  now in the hospital for heart problems.  This follows a stroke in the month of September.

(You can read more specifics at Steve Giddin’s Blog , as well as the usual Chess Vibes and Chess Base news services)
The 81-year old Leningrad-born legend was in excellent health when I last saw him in the month of August in Geneva for the ”Legends” vs ”Geneva Chess Club”.  Ofcourse, he was confined to a wheelchair, but showed no signs of slowing down. For the first time (and probably last time) Viktor and I were on the same ”team” as we dueled with Geneva’s brightest and best.

Infact, having known Viktor for more than 25 years, I would say that his chess in Geneva was some of the best that he has played in as many years.
Witness his game with the young talent  Lars Rindlisbacker (below).  I remember following this game from time to time, while I was playing my own game, and I was really impressed with the way Korchnoi time after time managed to find energetic and surprising tactical obstacles to put in his opponent’s way.  Korchnoi at his very best! 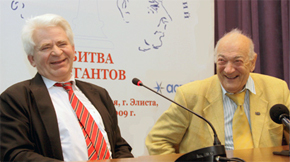 Anyone who had ever met or played ‘Viktor the terrible” –as he was affectionately called in his younger days–would have come away with priceless memories of their encounter.  A fierce competitor, Viktor is also a man of strong principles and beliefs.   As such, he is often blunt to the point of insult when he expresses himself.
For example, if you were to offer him a draw, he would sometimes shout ”No!” at you. I remember , once, when in Toronto 1985, IM Jean Hebert offered Korchnoi a draw soon after the opening…Korchnoi shouted ”No!  I am better!”.  (Jean could only shrug and say ”O K…”)
Or if, during the postmortem, you would ask him if he thought the position was equal or just a bit better for him, he would tell you point blank that you are LOST!  Postmortems with Korchnoi could be just as tough as the games…and immensely entertaining for the spectators.
Spassky and Korchnoi (photo above) have known each other since childhood and have played many, many memorable games.  In 1977/8 they played their second Candidates’ Final match (the first was ten years earlier , in 1968)  in Belgrade and their relationship soured because of the tension.  For something like 10 years they both refused to speak to each other…Fortunately, both have forgiven the other (or have forgotten what they had been so angry about!) and are once again on good terms.
I have many fond stories of Korchnoi, having played him about a half-dozen times.  One of these stories also involves Spassky.  We were all playing in the very strong 1989 Clermont Ferrand tournament  in France and had been invited to a reception at the mayor’s office on our first rest day.

My wife Aida  had politely accepted a glass of champagne; I say this because my wife does not drink at all.  Soon it became apparent to others that she was not a drinker, and at one point Spassky came up to her and offered to relieve her of the burden of holding onto a glass of excellent champagne that she had no intention of drinking…Aida was only to pleased to accept Boris’ offer!
Almost immediately, Korchnoi comes up to my wife and I and said ”You realize that Spassky had just made a draw offer!” (Spassky and I were slated to play the next round).
It is true that our game the next day was a draw, but Boris’ draw offer never came!   Infact, I had to suffer a long time before making it…
——————————————————————–
Share