SPRAGGETT ON CHESS
Following up on last Monday’s blog column dealing with the legendary Paul Keres and his visit to Canada in 1975 shortly before his death, below is a newspaper photo of the man himself giving a simul in Montreal on April 30.  The simul took place outside of Place Ville Marie on a wonderful spring day. 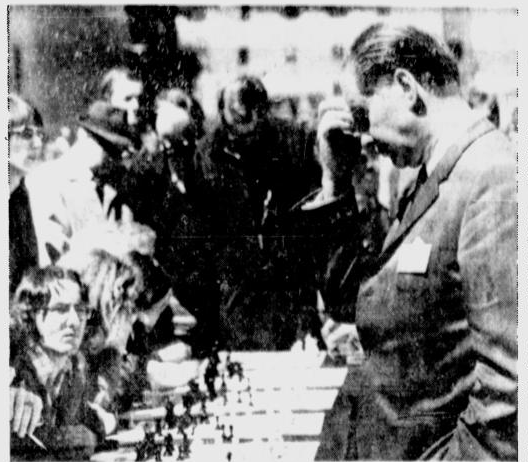 I was in attendence of this simul, though I did not play.  There were numerous spectators (naturally) and a local radio program carried the event live.  This was the ONLY time I had ever seen Keres in person, though ofcourse he was one of my childhood heroes and I knew most of his games by heart!
Keres spent about a month in Canada, his visit paid for by John Prentice, who was our FIDE representative (and zonal president) and one of the most influential individuals in FIDE in that era.

————————————————————————————–
A reader comes forward:
Salut Kevin, I am the bushy blond hair on the left. Keres busted me quickly on a Benko gambit. Beautiful day it was indeed. There was an aura around Paul that day. Very sad that he passed too soon afterward. Love your blog, chess and pussy! And I train on the 5 sec tests when they come up! Not much active these days, except on ICC. You were (are) quite a role model for us plebe (sp?)! Cheers! Gilbert Cabana (One blitz victory against KS!)
Share