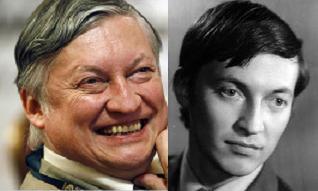 I found the 3 videos below at one of my favourite Basque websites (http://www.alexakechess.com/) and I recommend my readers to take a peek , even if you don’t understand Russian.  They are from the mid to late 1970’s, when Karpov –while not yet at his peak (that would come in the early 1980’s)–was becoming acknowledged as a sort of wunderkind.  Never before in the history of chess had a player dominated so totally his opponents (Fischer had, unfortunately, taken himself out of the equation by retiring).
It is also nice for me to be able to do a short piece here on this blog that does not have anything to do with Karpov’s short but disasterous adventure into world chess politics.  Anatoly will always be regarded by me as a great player and a person of impeccable integrity, even though I (and countless thousands of his fans) will still have to come to terms with him running such a controversial (read: underhanded) campaign.
But enough said!  No one is perfect (with the possible exceptions of  Toronto’s Bob Armstrong) and let bygones be bygones!  Enjoy!
Share