http://wycc2010.chessdom.com/
The World Youth took place at Porto Carras, Greece from October 19th to 30th.  The organizers were expecting 1000 to attend, but were stunned when 1,500 players from 85 countries showed up,   making this year’s event a big money winner.  By all accounts the event was well run, with an excellent webpage.  The only negative side that I noticed was that the published games were often late and only included the top handful of boards in each section.

http://wycc2010.blogspot.com/
The World Youth is really a whole series of separate tournaments divided by age and sex (Under-8, Under-10, etc with a  girls secion in each category).  A large contingent from Canada participated (photo above), achieving mixed results.  It is worth visiting the Canadian blog (above) for great photos and details. 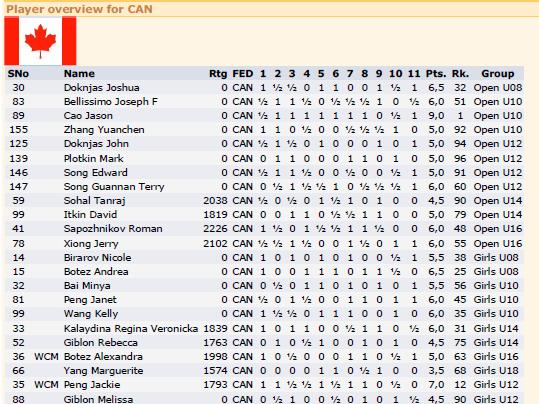 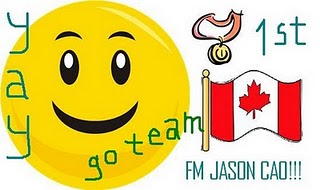 But the real story of Canada’s participation this year was Victoria’s Jason Cao gold medal in the Under-10 section!  Congrats Jason!!  Jason has earned bragging rights to being the strongest 9-year old in the world by virtue of his 8 wins, 2 draws and only 1 loss.

Jason has been playing for just 2 years, and much credit should go to  the Victoria Junior Chess Society (http://victoriajuniorchess.pbworks.com/)

o Assisting with the development of School Chess Clubs 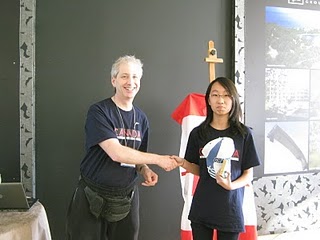 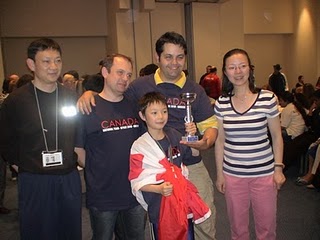 Jason had qualified for the World Youth Championship by virtue of his 2nd place finish in Canadian Youth Championship this past summer.  Already something of a media star in BC, Jason hopes one day to win the World Championship.  I am certain that all my readers wish him the best of success in the future!
Taking a fast look at the top finishers of the other sections, I could not help but notice that starting from the Under-12 section and above there is a big leap in average strength of the players.  For example, the Under-12 already has a number of master level players; the Under-18 has GM-level players.
If Jason is to repeat his success next year, then he will need some serious coaching and training. Players really start to develop between the age of 10 and 12, and this is when Canadian players usually start to lose ground and competitiveness with their colleagues from countries that have a more professional infrastructure in organized chess.
That is why, for instance, the top places in the older sections almost always go to players from India, China, Russia, Armenia, Poland, Turkey and so on.  It makes a big difference if a player gets coaching from an experienced GM as opposed to a local trainer at the chess club.  And for this reason Peng’s 12th place finish is a REALLY good result.
_______________________________________________________
I was able to find a few of Jason’s games from the event.  From what I can tell, Jason has an excellent combinative vision and his play is characterized by imaginative invention and a penchant for attacking.  He certainly has a lot of talent for a player just 9 years old!
GHOLAMI

JASON CAO
Black had just advanced his d-pawn, an overly ambitious move that he can not really be faulted with as it was very difficult to see Jason’s next move!

23.Bc8!!  ouch
A fabulous move that sets up a mate threat on the back rank! If Black captures the Bishop with his Rook then Jason sacrifices his Queen (23…RxB 24.QxRch!!) and mates the next move on f8.  So Black played the only good ‘move’: resigning!

WHAT DID JASON PLAY?


WHAT DID JASON PLAY?