Link
The second half of the Grand Slam (in Bilbao)  got off to a good start today with Ivanchuk crushing Nakamura in a complex Sicilian,  showing that he had recovered 100% after being mugged outside of his hotel just before leaving Sao Paulo  a couple of days ago.  The Ukranian superstar leads the tournament with 4.5 points out of 6.  The next highest score is 3 points (!), shared by no less than 4 of the remaining 5 participants!  It seems that the organizers needed Ivanchuk getting mugged in order to arouse public interest in what otherwise seems like a pretty dull affair, so far atleast…

The variation of the sharp Sicilian opening that appeared on the board  featured Black doubling White’s c-pawns in exchange for his dark square Bishop.  It is very difficult to evaluate these positions, and no doubt the American was hoping to gain something from this, atleast from the surprise point of view.
GM  Nakamura

GM  Ivanchuk
Black has the better pawn structure (ending)  but White has attacking chances on the K-side.  From Black’s perspective, he considers the White attack just a temporary initiative that will grind to an end once he is able to crash thru the centre with a timely …d5.  In praxis, however, one slip and that ‘temporary initiative’ might turn into a full blown mating attack!
Parts of this game remind me of one of Boris Spassky’s most famous attacking games (against GM A.Suetin in Moscow in 1967).    In that game Suetin’s …d5 break worked against him big-time:
gm Suetin 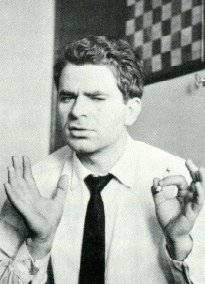 Former World Champion Boris Spassky (born 1937, St.Petersburg) was a fearsome attacker in his prime, arguably the best of his generation..  Curiously, Bobby Fischer considered him a much better attacker than Tal–whose style of play Fischer considered reckless and more oriented for the spectators than anything else…

If 20.Rh4 g6! 21.Rf-h3 Rg7!! and White’s pieces are beginning to look foolish and there is no mate!  So the logical conclusion is that moving the Rook to h3 first is not dangerous for Black, providing (of course) that Black finds the right defence!
IN THE GAME , Ivanchuk therefore played 18.Qh4!?  and Nakamura immediately went wrong with the routine 18…Ne7?  ( Once more, the Nimzovitchian 18…Nb8!! followed by 19…Nbd7 provides a satisfactory defence)

With a position strikingly similar to the Spassky vs Suetin game (Moscow, 1967) above!  Black is faced with mate and finds himself helpless.  He can resign with a clear conscience…

”Nimzo-who??”
INSTEAD,  both players were in severe time-trouble (reports claim that they had just a few minutes left each to reach move 40) and Ivanchuk played the optically good  20.Nc5 (?) and the game became a chaotic western-style shoot out with the advantage changing hands several times before Nakamura losing.  A great game for the spectators!