Ivanchuk blown away in 2nd game!

LINK
It was a very bloody round today, but the apparent ease and speed with which Radjabov dispatched Ivanchuk must stand out as the outstanding achievement of the day.  Both players will go to the tie-breaks tomorrow , along with Grischuk and Navara, to see who will join Svidler and Ponomariov in the semi-finals.
IMAGINATION AND COURAGE WIN THE DAY!

After his crushing loss the day before, I was wondering about what kind of mind-set  Radjabov would come to the game with.  Would he feel demoralized and offer an early  draw like Morozevich did against Grischuk earlier in the World Cup (and then go home)  or would he come out with guns blazing?
It turns out neither!  Radjabov played the calm 1.Nf3 and pretended that yesterday never happened.  Soon the game turned into a symmetrical English (A37), an opening known to lead to complex and dynamic positions where even the theorists can argue for hours on end as to who is better!
GM  Ivanchuk﻿

This move has been played before, but does not have a very good reputation.  The idea –clearly– is to open up a second front on the Kingside and to provoke …h6 , which might or might not be a weakness of some consequence later in the game.
From a strategy point of view I can not fault White’s idea, and given the special circumstances underwhich the game was played I think that the move rises to the situation.  Soon both players will be in a messy, virtually unexplored position; they will have to rely on their own resources.  There followed:
7… h6

The standard response; you don’t want to allow the White h-pawn to advance all the way down your throat!  Now 8.h5 will be met by 8…g5.

Radjabov , before making his 8th move

In my database I count 11 games that reach this position.  In 8 of these games Black plays the logical 8…d5 (!) and scores some 81%.  Ofcourse, these stats are irrelevant because most of the players are unknown and probably not very strong.  Never the less, 8…d5 is a move that must certainly be good (and strong), much as 8…d6.
Curiously, in as much as Black soon finds forced to make some not very easy  decisions, Ivanchuk’s next move must be considered something  less than perfect solution to his development:
8…b6  (?!)

Understand that I am not really criticizing this move or suggesting that there is something wrong with it.  But much of what soon transpires is made possible by this apparent  tempo loss.  Especially, the d6-square is being neglected by Black.  These factors allowed Radjabov to complicate the game with an absolutely brilliant twist, bringing about a situation very difficult to properly evaluate! 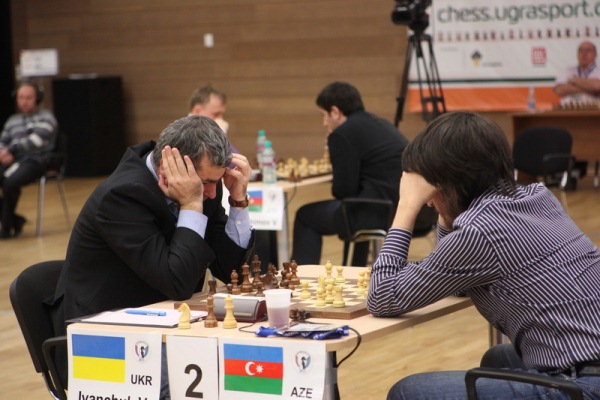 White has significantly increased his positional assets : the Bishop pair and absolute control of f6 (Bf6 followed by the rapid advance of the h-pawn can not be prevented for long).