Is the whole world going crazy…?!

BELIEVE IT OR NOT!

The knights in Kevlar armor gave all seven suspects desk-appearance tickets.
The chess tables where they were ticketed for “failure to comply with signs” are in a fenced-in area where posted notices read: “Adults allowed in playground areas only when accompanied by a child under the age of 12.”
Police said the rule protects kids from pedophiles or others who might want to harm them.
A police source added, “It’s the broken windows theory . . . small things can turn into bigger things. Some citizens may see it as police harassment, but God forbid something happens to a child, people would be complaining, Why didn’t the police enforce these rules? That’s what they would be griping about.”
Yacahuda “Y.A.” Harrison, 49, one of those chess aficionados, said he saw those signs months ago and “asked the [Parks] ranger if we had permission to be there.”
“The ranger said, ‘Oh no, that’s fine, that’s only written for pedophiles.’ ”
Since then, he said, parents have welcomed him and the other players — and even had their kids take chess lessons from them.

“The day we got picked up, there were no kids” in the playground, he said. “They treated us like drug dealers. All we were doing was playing chess.”
Harrison, like the others, must appear in Manhattan Criminal Court on Dec. 28 for the Oct. 20 incident.
Another man ticketed that day, Inwood resident and artist Junior “Chiqui” Mendoza, 46, said that the police “should have given us a warning, and not a ticket.”
Margaret Blachly, a teacher who took her students to the park yesterday, said, “There are often a lot of rules in this park that get broken, and no summonses are issued.
“If the tables are there to play chess, that’s what they should be allowed to do.”
But Parks Department First Deputy Commissioner Liam Kavanagh said the rule is “designed to protect children using our playgrounds and to deter inappropriate adult use of space designated specifically for children.”
NYPD spokesman Paul Browne said, “Police acted appropriately in issuing criminal summonses last month to men in a section of Inwood Hill Park restricted to children with their parents or other minders.

Makes you wonder!  What happened to the America that I used to know?  Michael Moore must be busy doing another film….This week  in the news a lot of noise about the TSA and airport security has been heard.  Many passengers are beginning to feel that the new technology is being used to humiliate them:

SORT OF REMINDS ME OF ALICE’S RESTAURANT…

I feel it is only appropriate that I follow the above news items with something meaningful.  Did you know that today is World Toilet Day?  SERIOUSLY!  I read this cool article on how the Victorians used to wipe their bums.  Read on!
HOW THE VICTORIANS WIPED THEIR ASSES 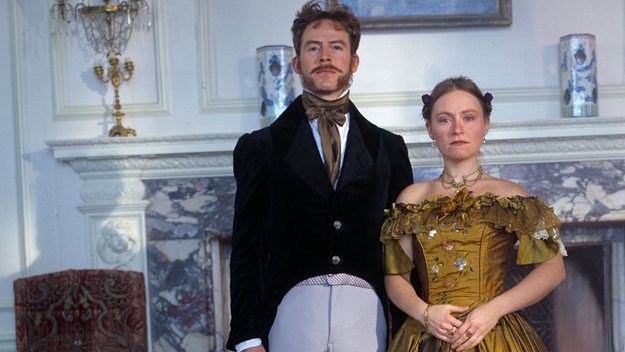 EVER WONDER WHY THE VICTORIANS NEVER SMILED IN PHOTOS?
http://wellcomelibrary.blogspot.com/2010/11/item-of-month-november-2010-victorian.html

Item of the Month, November 2010: A Victorian Paper Trail

Among books, journal articles, pamphlets and bound volumes of patents about Victorian toilets (flushing or non-flushing), systems of varying complexity for the disposal (and recycling) of human sewage and many items about personal and household hygiene; we also have in the Wellcome Library’s Ephemera Collection what must be fairly scarce examples of late 19th century toilet paper.
Our main example comes from the 1870s, when one popular product was the Diamond Mills Paper Company’s ‘Bromo Paper’ which came in packs of about 500 individual sheets inside a solid card box (21 x 15 x 3 cm.), open at the top so that single sheets could be pulled out as required. Every sheet had a distinguishing watermark of ‘Bromo’ so that counterfeit versions could be easily spotted (the packaging states this was a problem in India). This toilet tissue had been awarded the highest prize at the Paris Exposition in 1878 and every pack proudly bore reproductions of both sides of the medal to prove it. The Wellcome Library holds one such pack, now catalogued as EPH471A. 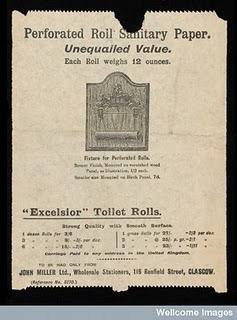 The paper contained the “disinfectants and curatives” Bromo chloralum and carbolic acid, which the manufacturers’ claimed would “…render its use not only a positive preventive of that most distressing and almost universal complaint, the Piles, but also a thorough deodorizer and disinfectant of the water closet”. However common haemorrhoids were at the time, the flush toilet was certainly not standard in 1878 and the smells that would have developed in the non-flush version, particularly over a hot summer, would have needed all the help with deodorization that could be given.
The pack would have slotted neatly inside a wooden case which hung from a nail in the water closet wall, next to the toilet. A typical toilet paper polished wood case that would have held the box of individual sheets is illustrated on what is most likely a salesman’s sample sheet of ‘Globus’ paper (EPH471:38) and was available from John Miller, Ltd., manufacturing stationers, 116 Renfield Street, Glasgow for one shilling. If you preferred your paper on a varnished wood and bronze finish toilet roll holder (illustrated on the ‘Excelsior’ paper sample, EPH471:37), that could be purchased from the same firm for one shilling and threepence. The samples would have been shown to prospective retail stockists by hopeful salesmen.
John Miller Ltd. also manufactured ‘Purolette’ (EPH471:39) and ‘Silkine’ (EPH471:40) brands of paper. They promised no stoppage of drains or injury to health (whatever injuries other brands of toilet paper may have been causing at the time…) and were advertised as being soft as silk, but also thin and tough. The samples we have feel more like greaseproof paper than silk – which makes us wonder what our Victorian ancestors would have made of today’s luxury toilet paper brands.
As today is World Toilet Day – which raises awareness on sanitation in the present day – it seems the perfect occasion to ponder these examples of nineteenth century sanitation advancement. Furthermore, as all the thousands of items in the Library’s Ephemera Collection share the fact they had a practical use before being discarded, can there be more apt examples of ephemera than our surviving material from John Miller Ltd and the Diamond Mills Papers Co. ?
____________________________________________________________________

Wow!  That is enlightening…try using this story at your next party!


As a way of a small digression, I was able to recently visit the washrooms of both the CFC and the CMA.  I tell you, what I saw explains a lot about their behaviour…. 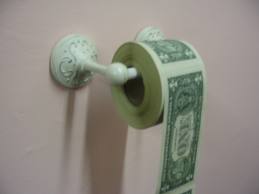 PHOTO FROM THE CFC EXECUTIVE WASHROOM