Is Poker a sport?

Is Poker a Sport?
http://uponfurtherreview.kansascity.com/?q=node/1605

The World Series of Poker Championship was yesterday and ESPN carried it. The question is commonly asked whether or not Poker is a sport. I don’t know whether it should be called one or not. I happen to be a huge poker fan – not so much the typical game you see on the tube, but rather a fan of unique poker games with a bunch of friends. We’ve met every third Friday of the month for 21 years (this January). Even though we don’t play the traditional games – pretty much only what we have created ourselves, poker is still interesting on the tube – especially when Mi$$ion$ are at stake.
I had been watching the rounds leading up to yesterday’s final table because when you work at your computer all night long and you have a T.V. sitting right next to you, you have to have it on something. Your choices are infomercials, weather channel, infomercials, PBS, infomercials or… World Series of Poker.

As to whether you consider it a sport or not, I liken it to a foul in basketball. “That wasn’t a foul”, the coach yelled at the official. “Then why is he out of the game with five of them?” A foul is, by definition, a foul if the official calls it a foul. End of story. The same thing is true for “sport”. If ESPN televises it, then, by definition, it is a sport. The last I checked, the SP in ESPN stands for Sports Programming.
Of course, there is a perfectly valid criticism of having it on ESPN. Is scrabble a sport? Chess? Bridge? Checkers? I think we would all say “no”. After all, there isn’t much difference except that poker is traditionally identified with high risk – a lot at stake – money and bullets. In that respect, it probably transcends the typical table games. Thus, if ESPN calls it a sport, I guess it is.
>>>>The guys in my poker group go back a long ways. Many of us have known each other since college and even before. One of them was a childhood friend of mine. Our first game was played at a Super Bowl party, January 19, 1989 (Super Bowl XXIII San Francisco over Cincinnati 20-16). We’ve never missed a month since.

Many of our games are ones we created from scratch in the early years. Some are a variation of other games that you may have played or read about. The overriding thought we had in developing each game is that we wanted to have incentives to stay in the pot; we wanted to have as much suspense as possible; and we wanted to complicate it. Here is a link to our Poker Rules and Games.
>>>>The World Championships started with 6,500 players – all of them forking over $10,000 clams to participate. No matter how good (or rich) you are, you are at the mercy of luck. The best players will, on average, get much farther in the tournament, but the odds of any of the well known pros making the final table are extremely slim. In this case, there was one who did – the very likeable Phil Ivey. He didn’t win – coming in 7th out of the final 9, but even that is a remarkably high finish. 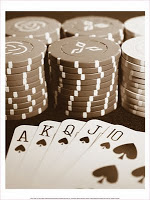 You have to realize that, although a bad poker player could never make it to the final table, an adequate player could. Many of those who have made it that far once have never been heard from since. It’s just the way it is. It doesn’t take being lucky too many times for a decent player to advance. Of course, bad luck just once could easily be the end of the line – even for the best players in the world.
>>>> Among our best ideas is the way we play. Among them are that we only use quarters; the dealer always antes for everyone so that we don’t have to fight over who did or did not ante; and we play the same game three times. On the fourth time, the next person in line calls the next game. Each of those rules move the game along at a good pace.
It’s for money, but friendly. Over the years, we have all pretty much broken even – although on a good night you can be up $60+. On a bad night, maybe down $40. For all of us, the quarters just sit in a container 30 days a month and then come out to play every third Friday night. I wouldn’t be surprised if I have owned and disowned the same quarter a thousand times.

>>>>Poker was reportedly first played in New Orleans in 1820s with a deck of 20 cards, four players betting on which player’s hand was the most valuable. The game spread from there to the rest of the country by Mississippi riverboats, on which gambling was a common pastime. Later, players used a deck of fifty-two cards, dealt each player five cards, and drew more cards from the deck. Stud poker, in which each player is dealt a first card face down and the next four cards face up, was not invented until about 1864. As poker was played, more changes gradually came about.
I doubt anyone ever envisioned it being played for $8.5 million dollars without a bunch of itchy trigger fingers under the table. When you stop and think about it, what other sport has anything even remotely close to a situation where a player can lose and walk away with $1.3M or win and walk away with $8.5 million – at least without getting your brains knocked out like boxing? Not a bad day’s work, even for failure.
>>>>The final head-to-head matchup came down to a 21 year old “pro” and a 40 something year old hefty logger who lives in a shack in Wyoming. The disparity between them was striking. Back and forth. Forth and back. Eventually, the kid won and became the youngest winner in WSOP championship history.
Although I’ve played poker for many years and am a stats and odds person to the core, I can’t imagine ever playing what you see on T.V. No limit hold-em would be relatively boring to me after being exposed to the games our group plays. However, what makes what you see more interesting is the very fact that there is no limit. You make a bad call and you are history. In our games, we have limits – a maximum of $1.00 bets and raises with a maximum of two rounds of betting. You may very well stay in the hand no matter what. Bluffing is much more difficult to pull off. It’s more about probalities and unique games than it is about simple rules and bluffing out your opponent. We almost always play the cards. These guys almost always play each other. I can figure the odds on the cards, but I can’t figure the odds on the human condition. 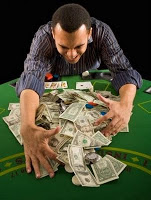 However you play it, poker is a very challenging “sport”. Unlike other sports, you aren’t going to get hurt participating. If the people you are competing with are friends, you are going to have a good time. For us, it is 5 hours long (7 p.m. to midnight) and we rotate it between our houses from month to month. The best part of it is that it is five hours of entertainment for free – assuming we all break even over time. And, that’s very tough to beat.
For the pros, it’s getting to play cards for a living. And, if you are a 21 years old kid named Joe Cada and don’t have to “work” another day in your life, that’s even tougher (nay, a lot tougher) to beat.
Shuffle Up and Deal!
Share