Nyzhnyk
White is clearly better here, with an extra pawn to boot.  Black sacrificed the pawn in the opening–hoping to get activity and to later recover it–but instead found himself slowly outplayed.  Now that the pawn has advanced itself securely to d6, Black finds himself with serious difficulties.  Notice that the Queen is the worse possible piece to blockade a pawn!
The problem, from White’s point of view, is how to make progress.  Nyzhnyk finds a creative solution:

The position that White wanted when he started his combination.  White’s threats are very serious: moving his Rook to the seventh rank and then advance his d-pawn.  Surprisingly, Black has no good defence!  So he tries to confuse his young opponent…

So Black has succeeded in preventing the advance of the pawn, but unfortunately for him White has a cute tactical idea that breaks thru.  This part of the game is very instructive and the reader is advised to pay close attention to the important role of tactics in White’s plans.
40.Rc7! b4 [40…Be8 41.Nd5! wins easily enough ] 41.d7!!

A beautiful move! White simply ignores Black’s attack on his Knight and seemingly sacrifices his main asset: the strong passed pawn. If now 41…Bxd7 then 42.Nd5! wins material. Or taking the Knight on c3 allows 42.d8(Q)! followed by a mate on g7. This leaves Black only with the text:
41…Nxd7 42.Nd5! Qe8 43.Rc8!

VACHIER   LAGRAVE
It has been a tough struggle but White has achieved a winning position.  The semi-open h-file allows a winning motif against the Black King should White be able to play Ng5 or Rh3.  So clearly White must first move his Bishop from g5 to make it possible for the Knight to move (and clear the way for the Rook to go to h3 , should it be necessary).
The precise route to victory begins with 32.Bf6! (32…gxf6 ( no good either is 32…Nd3 33.Rxd3! Qxd3 34.Ng5! etc ) 33.exf6 Rc1 34.Qh6 etc.)
However, the young French star tries to rush things and plays a move that seems to be just as strong but infact allows Black an absolutely spectacular way to escape! 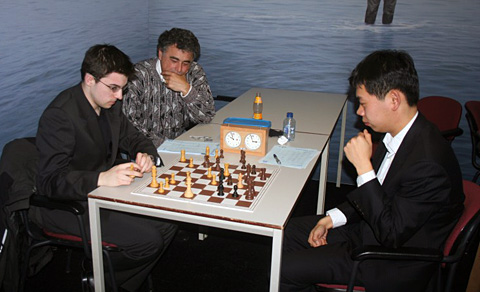