How good is your chess?

GORMALLY
This game was disputed in the London Open tournament going on at the same time as the London Classic.  The position is just slightly better for White, but Black should not have any real problems: the weak White a-pawn and the strongly posted Knight on c5 are rock solid guarantees.
White had just played 28.h3 , a handy move that might be useful later.  As it turns out, it is the winning move, as Black now played 28…Rc8?? (lining up his Rook and Queen) and after 29.Bg4 Black resigned.

A. GUPTA
Also from the London Open.  White had just played 23.Re1 , threatening the Black e-pawn.  Clearly Black does not have a very pleasant position, especially with his King stuck in the centre.  But chessplayers must discipline themselves to play both good positions and inferior positions, and here Black’s task should be met with 23…Kf7! (defending the pawn) and preparing to bring into play the King Rook.  If in the end this is not enough to save the game, then –as Lasker used to say in such positions–”all is lost save honour!”
Instead, probably dejected, Ledger played the horrible 23…Qf7?? which seems to defend the e-pawn, but infact jumps from the frying pan into the fire: White played 24.Nxe6!! and Black immediately resigned!  After the mandatory 24…Bxe6 White wins the house (and probably mates to boot!) with 25.Qxd5

RUDD
From the same tournament, White had just played 10.O-O-O, bringing his Rook into play and defending the White Queen.  White now anticipated a long struggle after the apparently forced 10…QxQ 11.RxQ e6!?, holding White to a minimal endgame advantage.
Black thought that it might be wiser to let White exchange Queens on b6 (it would fix Black’s pawns) and played the blooper 10…Bb7???     After White’s next move , 11.Nb5!!, Black resigned! 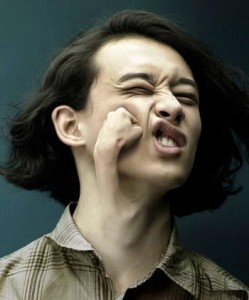 Today at the Russian Championship the only 2 games to end in victory saw the Bishop pair as the decisive strategic advantage.  In both of the examples given below, I recommend the readers to closely play over the games several times each.  Much is to be learned by observing the techniques of grandmasters in utilizing small positional advantages.

This is the position after Black’s 21st move. Black has a solid position, but no play. White, on the otherhand, has an obvious plan to exploit his 2 bishops: advance his Kingside pawns , create weaknesses and use the open h-file for his Rooks.
Tomashevsky did not want to sit patiently and instead tried to create play by advancing his Queenside pawns. This only lead to weaknesses, and White soon found a way to cash in his Bishop pair for an extra pawn. A nicely played ending.