Was held in Calgary last weekend, essentially a two-round a day event.  Supposedly the strongest closed championship ever held in Alberta, many of the games were utter crap and downright embarrassing.  Two of the last round’s games were fast draws: 5-moves and 11-moves respectively, but could be considered some of the better efforts! 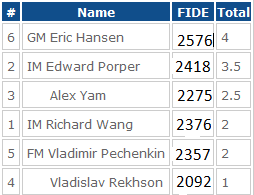 Fortunately,  Hansen and Porper’s class saved the day and atleast some of the games had some instructional value.  Eric won several nice games, including against second place finisher Porper.

Porper has a reasonable position but could not find a constructive plan and slowly got ground down.