The bloodiest round so far, but not a good day for Canadian chess fans.  Eric lost a messy game against the French star Edouard.  White seemed to effortlessly build up a kingside attack but then played inaccurately, giving Black the opportunity to get the upper hand.  Unfortunaely, Eric missed it and soon found himself lost.

In other match-ups, Shankland beat Ftacnik in a good game, and Balogh ground down Alsina.  Narciso and Lopez took no chances and drew a boring game.

Now we have just 2 rounds remaining and not less than 6 (!) players within half a point of each other.  Don’t count Eric out yet!  Looks like everything is going to go down to the wire… 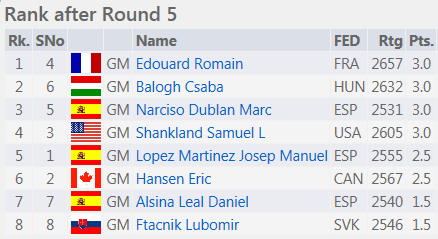 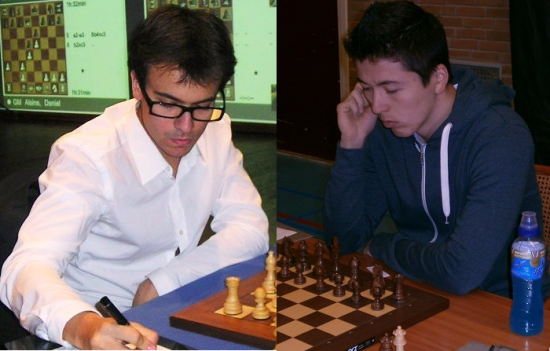 A well known position in grandmaster chess, and one that can come about thru various openings and move orders.  For instance, one can arrive here via the 4.a3!? variation of the Queen’s Indian.  While it is not entirely clear what is Black’s best continuation, most grandmasters have faith in 16…Bf6!?, ready to meet d5 with an exchange of Bishops.  Results are quite reasonable as far as I can tell.  Black often follows up with …Rc7 and Rd7.

Provocative play!  I could find only one other game with this continuation.  I don’t like the move very much, but to be fair, it leads to  very complex play and might be perfectly playable!  The French star decides to test Eric’s idea…

Each pawn structure has its own thematic break-throughs and attacking sequences, and in this kind of Queen’s Gambittish position this is the most often seen manoeuvre.  At the cost of a pawn, White forces open lines and establishes an advanced outpost on e5.

A typical theme in such positions.  The move Ng5 is almost impossible to prevent.  If 19…h6?!  20.e6! is strong. Eric finds a clever way to bolster the third rank…

White has dangerous attacking chances and Black must be very careful. Black’s last move tries to block out the dark-square Bishop

Not just an artificial-looking move, but  a weak one that allows Black a surprising opportunity to get the advantage! Correct was  22. Bh7+!  Kh8 23. Bb1 Qe8 24. Bxd4 and White is clearly on top.  INSTEAD, Black can get the advantage with the sharp:

GETTING BACK TO THE GAME:

White to play and WIN!