Four rounds to go and the as yet undefeated team from Russia finds itself with a very slight lead over China and the Ukraine.  Russia has already played China (it won by a narrow margin thanks to Grischuk) and tomorrow it will face the Ukraine.
But it is still way too early to sit on its laurels and with such a densely packed field at the top everything can change in just one round!  Here are the top 20 places after 7 rounds: 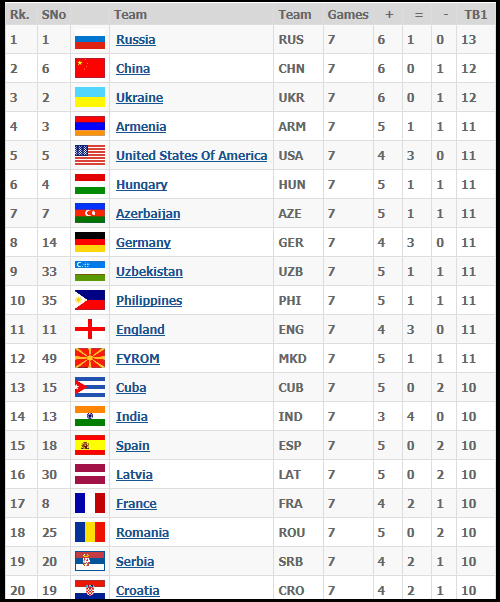 After having NOT won the Olympiad in quite a while, team Russia is determined to change things and as one can see from the above Russia has only lost one game (!) of the 28 played so far.  This is quite an achievement considering the calibre of teams it has had to face so far.
Another impressive result is that Tomashevsky has been identified as the ”off-form” player and has been sat out more than any other player.  This identification process is a key step in being able to field its best team round after round.  Tomashevsky will probably only be played should one of the other players really need a rest. 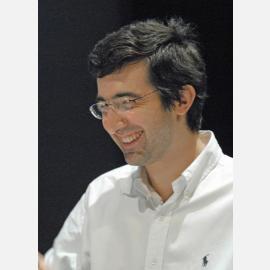 Especially important is Kramnik’s defence of the first board: he is plus one and has played 6 games so far.  Playing first board is an especially important role as the whole team looks to first board as a sort of leadership role and can inspire confidence.
Jakovenko has an equally impressive result defending the bottom board with 5 points out of six.

BUT the most impressive player, in my opinion, is Alexander Grischuk, who has an amazing 5.5 points out of 7 playing on second board, giving him a performance rating of 2850.  Even more amazing is that he alone has won almost as many games as all of his team mates combined!  Grischuk has made only one draw so far…
Today Grischuk won a pawn early on but it did not seem clear whether he would be able to break down his opponent’s stubborn resistance.  Safarli constructed a sort of Maginot Line in the centre, preventing Grischuk from penetrating directly.

gm  GRISCHUK
In the diagram position above, White can get no further in the centre, and so Grischuk played the annoying 35.Re3!, planning to weakend the Kingside pawns by moving his Rook to g3 and h3, depending on Black’s move. 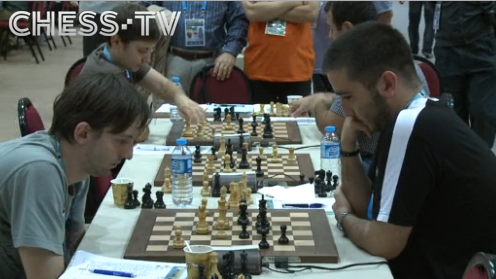 Grischuk won in 50 moves, once more giving Russia a match victory by the slimmest of margins.

Tomorrow’s parings are given below and much excitement is expected as the final days of the Olympiad approach.