The 4th round of regulation-time games finished today, and only 3 have managed to move forward: Navara, Svidler and Radjabov.  The rest have to sweat it out in the tie-break games tomorrow.

What can one say about the chess being shown at the World Cup?  The word exciting comes to mind…and I am certain no one would object strenuously.  But what about quality?  You know, that dirty word that chess historians like to use when comparing one generation with the past…I think it is better not to use that word in Khanty Mansiysk!  Quality of play should be an intrinsic measure of where the chess community parks its apples.  In my opinion, very few games are being played there that will be talked about soon after this event is over.
We hear a lot about FIDE elo calculations, rating inflation and how bad it is for the promotion of the game to have short and boring draws.  But where are those same conscientious objectors  when we talk about lack of quality of the games being played today in the chess world?  Sure, the time control is faster than before and that excuses the poor endgames being played.  Or does it?  It seems to me that chess is losing prestige in  the world because the game is being dumbed-down in the Kirsan period of time.  Faster time controls and shorter-matches should not be an end in itself…

Is Fischer rolling in his grave because of what the game has become? 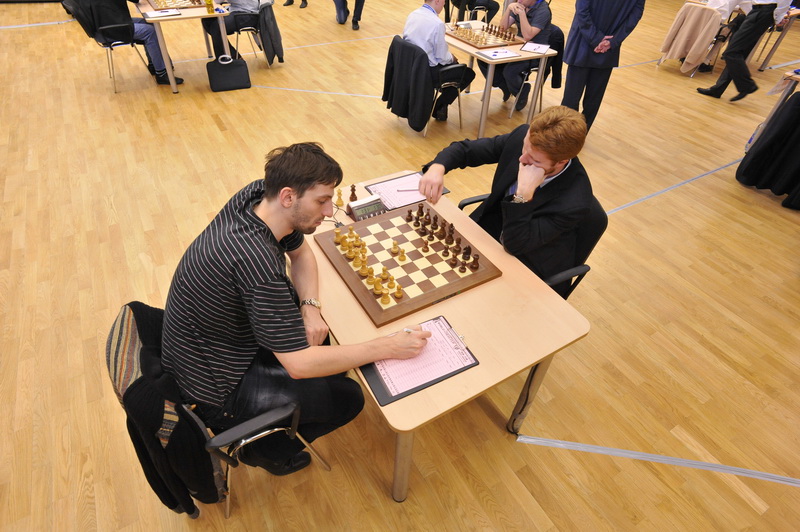 That being said, this writer does enjoy playing over exciting games.  And thanks to some of the players, especially Alexander Grischuk,  we can still find one or 2 games that chess fans can  appreciate for intrinsic qualities not directly related to the clock or the number of spectators and sponsors.
GM  POTKIN

GM  GRISCHUK
Here most grandmasters would have probably castled and played for f5 sometime in the near future, trying to create a sort of attacking position.  No doubt the spectators would have approved!  But needing to win (Grischuk lost the first round) in order to equalize the score, Grischuk had more on his mind than what the peanut gallery would have to say after the game was over.
He played the Fischer-like 18.Na4!! , emphasizing the importance of good endgame play and small advantages  (you know, what Steinitz and Lasker wrote about ).  After 18…Bb4  19.Bc3  f6?!  (trying to get some counterplay).  Grischuk came up with the elegant 20.Bg4!! and Black found himself in a strategically lost position.

No doubt the specators had no idea of what was happening here….they rarely see great chess these days.