Grischuk has bigger things on his mind…. 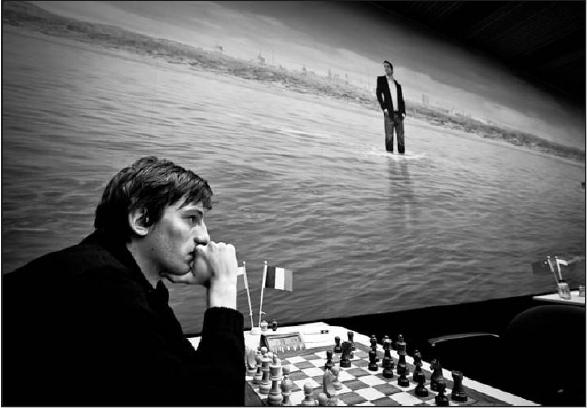 Contemplating his real objectives
Is 2011 going to be the best year of Alexander Grischuk?  Will this  27-year old Russian superstar defy the betting odds and win the Candidates Tournament to be held in just a few months time?  If so, then certainly the year could not have started in a more inauspicious manner…

Grischuk lost for the second time in the tournament and now finds himself with just 1.5 points in 5 games, a mere half-point ahead of jinxed Alexi Shirov who ‘owns’ the cellar, and 3 points out of first place leader Anand..  Certainly Grischuk can still come back and win the tournament (history records such Rocky-type comebacks), but the writer wonders whether the Russian is not just holding back and saving himself for a  more important occasion… 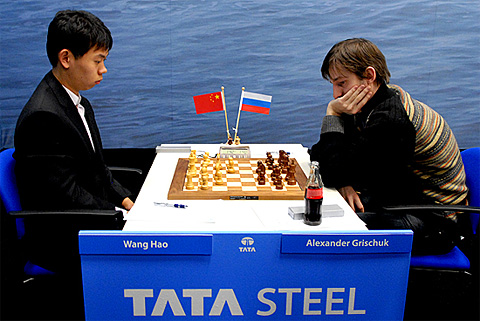 GM    WANG HAO
A known theoretical position but one which has never really been worked out.  It is a messy position.   In my own database I find just 2 games from master chess reaching this exact position.  White’s last move intends Bg4 (and Be6) and , if allowed, putting pressure on the e-file with Qe2 and Re1.
Black’s best is to continue 16…Qf7 (as in Petrik vs Talla, 2009)  After 17.Bg4 Black should not take the d-pawn with his Queen (as in the game!) because after 18.Qe1! Qb5 19. a4 Qb6 20.a5 Qb5 21.Be2 won a piece and the game.  Instead, Black can get an acceptable, but passive, game with 17…Nxd5: 18.Qe2 e5! (forced) 19.de5 de5 20.Rae1 Rfe8 21.Qc4 c6 22.Re4 followed by doubling on the e-file.  The strong Knight on d5 should provide against anything really bad happening to Black, though White’s creeping pressure must always be watched with vigilence.
INSTEAD, Grischuk played the over-confident and disrespectful :
16…Rxf3?! 17.Qxf3 Qf7

Now should White mistakenly exchange Queens here then Black will soon take on d5 and have a super solid position without any big worries. BUT, Wang Hao is no push over and he instead played very precisely and built up a very promising position where his exchange to the good soon became a critical factor:
18.Qe2! Rf8 19.f4 Nxd5 20.Rf2 h6 21.Raf1 c6

No doubt Grischuk thought he had everything under control, especially since the White Rooks lack open lines.  However, the chinese star played the very energetic
﻿22.g4! e6 23.Qe4!

The threat of f5 is very nasty!  Now it becomes apparent that Grischuk had completely misjudged the position when he sacrificed the exchange on move 16.  Grischuk’s position is now suddenly desperate and though he fights like a lion, his chinese opponent does not relent with his attack!
POSITION AFTER BLACK’S 32nd MOVE:

Here the game is decided by a very clever and beautiful combination, taking advantage of the fact that the Black Queen is unable to participate in the defence of the Black monarch.
WHITE TO PLAY AND WIN!
33.Be5!! dxe5 34.Qxe5 Kg8 35.Rh1 Nf4!?(tricky!) 36.Kf1 !