”Take nothing on its looks; take everything on evidence. There’s no better rule.”  —Charles Dickens, Great Expectations. 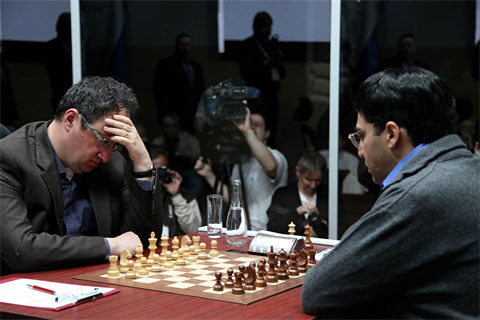 The 2012 World Chess Championship title defence by Indian superstar Vishy Anand against Israeli challenger Boris Gelfand was never expected— by those in the know—  to generate much excitement and enthusiasm in the chess world.  Today, after the completion of the 4th round game (an uneventful draw in 34 moves), one can say that everything has been proceeding according to their pre-match predictions.
Kasparov wrote that this match is the first time that the world title will be won by a pIayer who is not the strongest in the world.  While I disagree with Gary’s view on this vision of chess history (remember Petrosian vs Botvinnik 1963 ?!),   I myself wrote on this blog  that this match would be boring.  Very boring. 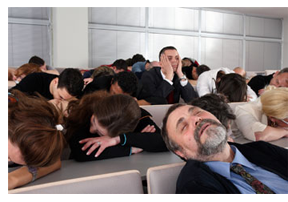 Zzzzz…
Both Anand and Gelfand are in their 40’s and certainly past their peak years. Both have stomach pouches that betray a certain satisfaction with how  life has treated them. Chesswise, both have scars of past battles and neither is  obsessed with the game anymore. Winning has become secondary to not losing….
Anand –sadly for his billion fans back home in India–is just a shadow of himself in his younger years.  Worse still, he has been stricken by a chessplayer’s worse nightmare: fear of losing….it is hard to ignore that Anand refuses to take any risks that have not been previously analyzed to death at home with his team and Chessbase’ latest software.

Gelfand,for his part, though a consummate professional who may  never have been a very spectacular player –even in his youth– has never the less managed to achieve a well deserved reputation for both losing very infrequently and knowing the Petroff Defence better than anyone in the world, is in Moscow to make sure that history remembers him with dignity and respect.

And the fans?  Well, I don’t think that either Anand or Gelfand are too interested in what the fans have to say about how the match is proceeding!  The players are being criticized in many corners for having made 4 boring draws (editor: infact, only 3 games were frightfully boring, and in the other the players  slipped up and let the game get out of control …producing some minor excitement for a few short moments before prematurely ending with a truce)  but they know only too well that most fans are fickle by nature: had either player thrown himself onto his sword in a heroic act of trying to win at all costs, then he would have been laughed at and ridiculed as  a coffee house player.

No one dedicates statues to heroes today
But not all criticism is the stuff of disgruntled fans lurking in the peanut gallery.  Some is very well thought out and worthy of taking seriously. After all, a world chess championship match has an obligation  to define our sport.  The respected English journalist Steve Giddins wrote on his blog after the first 2 meagre efforts:
”I live in hope of seeing some games of chess lasting beyond move 25, containing at least 50% moves not previously played before, and perhaps, if I am really, really lucky, some games that end in something other than a boring , fightless draw.”

This accurate and heart felt observation was then met by a long editorial on the excellent chess site ChessVibes entitled ”In praise of draws.” that ended with a passionate jab at Steve’s heart:
”If you don’t like this – if you only like fast, aggressive action – then you don’t really like chess. Don’t spoil it for the rest of us. Go watch wrestle mania or something.”

It did not take long for Steve Giddins to reply with a more detailed  explanation of his previous remarks about the Anand vs Gelfand match –and especially his view on modern chess in the computer age– entitled The Levellers:
”I should perhaps make clear that I am not really blaming the players. They are just reacting to the circumstances they find themselves in, and are doing what they think they have to do, to have the best chance of winning the match.”
In a fascinating and well thought out argument, Steve goes on:
”The problem is that computers are killing the game…The computer is now so powerful, that it becomes impossible to out-prepare another top player in the opening….And this is the crux of the problem in world championship matches… The result is a whole series of effectively contentless games, where the players are just checking each other’s computer-aided preparation. Once in a while, they will hit on a gap, and get some advantage, but most of the time, there will just be what we have already seen in Moscow – 15-20 moves of preparation, 4-5 more accurate moves, a dead position, and a draw.”

Capablanca first alerted the chess community to the problem of the draw
Steve then finishes by predicting the end of chess as we know it:

Whether we like it or not,–Steve might not like it–computers are here to stay and we will never go back, barring a sudden return to the stone age! And certainly chess is not the only thing in modern life that is seeing computers take a strong hold; the way we prepare for games, study and even play is changing just as  dramatically as the way we do day to day things unrelated to the game in any way.
Numerous activities and whole professionas have been eliminated because of computers, but even so, our world is probably a better place today because of the effect and influence of computers!  The problem is one of adaptation, and as chess players this is more easily said than done…we can be so stubborn when we want to be.
Steve brings up a lot of issues that are related to computers and their influence on the game.  I think it is important to separate some of these issues into what we are helpless to prevent and  those that we still can control.
As I see it, chess engines have not yet got to the point where we can work chess out, and probably never will, so we should not exaggerate the negative.  I for one would love to know if 1.e4 is better than 1.d4, but I am afraid that no computer will ever answer this.  It is a pity, really, because it would cut down my study of openings significantly…
The more tangible aspect of computers has to do with manipulation of chess information:  IN PARTICULAR the capability of storing and comparing millions of previously played chess games.  Databases, more precisely.  These are changing the fundamentals of the competitive player and how he approaches his tournaments and matches;  we can see this in Moscow this past week as both players are trying to use this information to each other’s advantage…and it is NOT working as each wants! 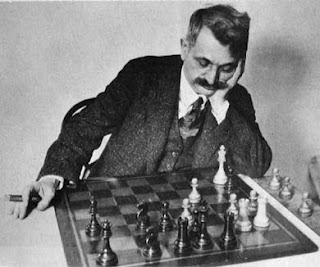 I wrote a blog entry in 2009 entitled ”Reflections on the Database Generation” that tried to tackle the issue of the effect of  easily accessible information on the game.  Former world champion Emanuel Lasker was the first to write on this theme in the 1920’s:

click on to enlarge
In essence, Lasker argued that databases (compilations of previously played games)  would deny the more naturally talented players of their expectations to get an advantage in the opening, thereby making it more difficult for them to win in the early phases of the game.  That it would NOT be the stronger and more talented players who would benefit from the existance of databases….but instead the less talented  intelligent learners.

A world renown philosopher, mathematician and games-player, Lasker was the first to perceive the effects of universally accessible information in competitive chess.

But curiously, what we find today is that EVERYBODY in chess is trying to derive some advantage from using databases.  ESPECIALLY the elite players , including Anand and Gelfand.  Anand brags about his use of computers!  And should we be surprised that neither of them can demonstrate the slightest edge it gives them?
Researchers in psychology have found that the fundamental advantage of naturally gifted and talented people is having the  skill set that allows them to adapt more quickly in any given situation than those without this skill set.  Shouldn’t Anand and Gelfand be doing something DIFFERENT from what the rest of the chess world is doing?  Isn’t a world championship match worth setting a new example?
Ofcourse, it is possible to write chapters on this theme, but– to give the short version– I believe the answer to the growing influence of computers (especially databases) in chess today is to avoid the preparation of your opponent.   Pure and simple: to vary your opening repetoire sufficiently so as to take your opponent not just out of his exact pre-game preparation but also to take him out of his comfort zone.
Former world champion Misha Tal said it best when describing his preparation for his game with Larsen in the Tournament of Stars (Montreal 1979):

(from my blog ”Reflections on the Database Generation”)
So I am not worried about the demise of our game as we know it.  Chessplayers are by nature stubborn and are creatures of habit–but this can be a double-edged sword..  Sooner or later they will realize that success in modern chess necessarily requires adaptation and constant change in how one does things in their approach to the game, its preparation and  then tournament competition in particular.
Gelfand and Anand , being in the 40’s, are not likely to lead by example.  Yes, it is true that Gelfand introduced the Grunfeld Defence into his repetoire for this match (and the one game that was ”interesting” was a Grunfeld) and this is a good sign, it is counterproductive to use it game after game!
SPRAGGETT  ON  CHESS
Share