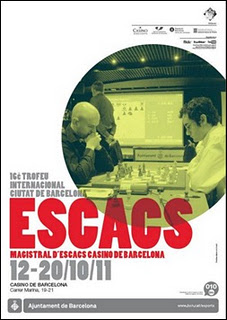 Yesterday’s game against my friend Josef Oms was a hard fought game that featured a lot of theory in a topical line of the classical Caro Kan.  I think that there were a number of points where we could have played differently (not necessarily better), but I think it is a fair assessment of the game that White was a tiny bit better thru out.
An interesting Rook and Pawn ending arose after White’s 29th move:
gm  OMS

gm  SPRAGGETT
I had been studying a lot of Rook and Pawn endings recently, and so it was pleasant to have an opportunity to play one.  Here material is even, but Black’s Rook finds it difficult to avoid playing a defensive role (something usually to be avoided in such pure Rook and Pawn endings) and White’s King easily comes into the centre.
What is the assessment of this ending?  Difficult to say without a deeper analysis (one game is hardly enough to draw a serious conclusion), but I think that White has good practical winning chances.  Oms decided not to defend his c-pawn with his Rook and to play actively with his King, putting his faith in his K-side pawns. In the pawn race that follows, White is faster because Black’s pawn formation (e6,f6 and f5) is awkward to move forward.  By time control I had a tecnically won game which required some precision.

Here I found the very precise (and probably only winning move)
42.Rf5!