Going in for the kill

“Possess the eye of an eagle, the cunning of a fox, the agility and alertness of a cat with the courage, aggressiveness and fierceness of a panther, the striking power of a cobra and the resistance of a mongoose.” Bruce Lee (1940-1973)

What makes a great attacker?
Bruce Lee realized that few fights are ever won with a single punch or a single kick, but rather victory goes to the one who is best able to endure and to adapt to changing circumstances.  In a game of chess the same is true: you must be able to bring the fight to your opponent- even if that means going onto his turf- and still be able to surprise him with unexpected tactical moves.
In the case of Alekhine, this often meant that his most diabolical attacks would have the scorpion’s sting only at the very end of a long sequence of complex moves.  For Tal, this meant wave after wave of tactical shots until his opponent becomes disoriented and can no longer resist.  For Fischer, this meant using surgical and mathematical precision to overcome all resistance.
What makes a great attacker? In short, effectively combining your unique tactical gifts with the hidden resources of your position and using this to defeat your opponent each time. 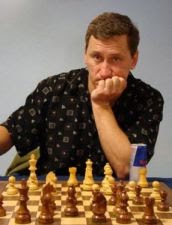 GM Oleg Korneev is no stranger to my blog readers.  This Russian of 41 years of age has a very refined sense of the initiative.  Once he catches the scent of a kill, Oleg is relentless.   His enormous energy allows him to pursue the attack without mercy, with precison and sang froid.


Witness the following game between Korneev and Serbian GM Paunovic played recently at the annual Elgoibar (Spain) international round robbin chess tournament.  Both players are castled on opposite sides , each trying to win in order to improve their tournament ranking. Black has the open g-file and White has the open b-file.  The advantage has already switched sides several times, and here is the position after Black’s 21st move :
GM PAUNOVIC

Black has over-estimated the pin on the Knight on f3 —  and  now Korneev senses it is his chance to impose.  He sees the idea of double attack if he can safely put his Queen on e4 (attacking f5 and b7), but is unsure if his attack will be sufficiently strong if Black can try to run with his King.  Korneev begins to look deeply into the position, seeking hidden ideas and resources.  He searches for a long time, without success…but then he sees it!  A quiet move –the most difficult of attacking moves–will have no good answer.
22. Bxf5! Nxf5 23. Qe4

Now should Paunovic return the extra piece by 23… Bxf3 24. Qxf5 Rd7 25. Qxf3 then White would have a marked positional advantage. The move 25… Qxc4 would fail to 26. Rxd6.  Ofcourse, Paunovic had forseen Korneev’s  22nd move and prepared:

This is the critical position that both players had forseen.  In Paunovic’s analysis, if White starts checking the Black King then Black’s King will escape to the Kingside and have a big advantage.  Or should White try to recover the piece by playing g4, then Paunovic reasoned that White’s King would also become very vulnerable.
Korneev showed what a great attacker he is by uncorking the spectacular
25. Nxe5 !!

A move very difficult to anticipate!  Already a piece down, White invests one more, threatening mate in one move, driving the Black Queen away from its dominating post on c5.  Note that Black can not decline the sac with 25… Qc7  as after 26. Qa8 Ke7 27. Qd5 dxe5 28. Rb7 is immediately decisive.

Paunovic thinks that Korneev has gone too far and that his attack can make no further progress.  Losing would be 26. Qa8 Ke7 and soon White would run out of checks.  Korneev’s next move comes as a complete surprise:

A brilliant attack, executed with precision, energy and great imagination.