World Champion challenger Boris Gelfand does not often give interviews. Quiet and soft-spoken, the Israeli GM avoids media attention and controversy.  On Chess In Translation are excerpts of an indepth interview with Gelfand.  I recommend the reader to take a peek at it. 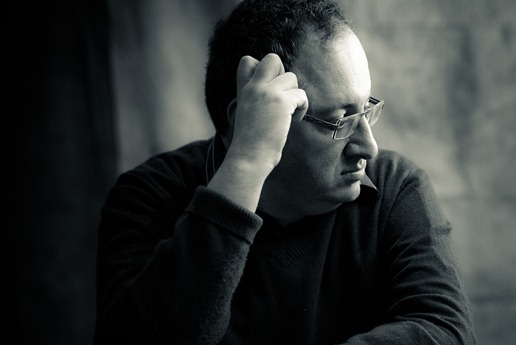 And could you–maybe not so much for me, as for young chess players–say what this daily work consists of? I’m not asking you for an hour-by-hour breakdown, but still, what is it you do? How do you prepare?
GELFAND:
”Well, how do I prepare… I review the games that have been played. If, for example, you don’t have much energy for creative work then you can sit and look through the games played, searching for some ideas.
There are a lot of ideas you can draw on from tournaments. That’s become the norm for everyone now – reviewing other people’s games. Sometimes I look at old books, or read magazines.
I flick through endgame books. You still have to refresh your endgame knowledge. If you don’t refresh it for a long time then at the critical moment it might not surface. It should be at the level of instinct.
I also sit, of course, and look at my own games. I try to advance opening theory. There are specialists who don’t consider that so important for the growth of chess players and think few games are decided in the opening, but it strikes me that’s not exactly the case.
Take, for example, Polugaevsky. Or Geller. Or also Kasparov. They became great chess players precisely because of their work on the opening. Therefore it seems to me that working on the opening is incredibly important, particularly nowadays.
If you don’t work on the opening you often can’t even get a playable position. Your opponent will be well-prepared and you simply won’t get any chances of making a game of it. Or you’ll do that at too high a price – you’ll end up with a bad position.
I’d also formulate a concept that’s rarely seen now: how you set out to play the game. It strikes me as an incredibly important concept as it’s crucial you don’t simply look at opening moves, but the idea behind the play. That’s the area I think about and work on.”
Share