Game 11 ended in what appeared like a well played draw.  Both players shook hands after 65 moves, when world title holder Anand had a perpetual check with his Rook. With the score now tied at 5.5 points each, everything comes down to the final game on Tuesday.  Who ever wins that game will become the new World Champion and take home a cheque for 1.2 million euros, while the loser wins 800k euros.

Everyone was wondering what Anand would play with his last White game, and whether he would play for broke with 1.e4.  Instead his 1.c4 indicated that his strategy is limited to try to survive the next 2 games and then see what lady luck will bring in the tie-break fast chess games.  We will have to wait and see what Topalov does Tuesday when it is his turn to play his last White game for us to assess the wisdom of the Indian’s match strategy.

The move 1.c4 is also known as the English Opening, in honour of the unofficial world champion Howard Staunton who had a liking for this move. 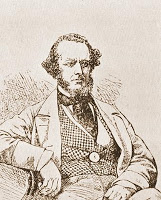 Howard Staunton, 1810 to 1874, cleverly avoided a challenge match against the American Paul Morphy, when the latter toured Europe after graduating from law school.  Staunton claimed he was ‘too busy’.  In life Staunton a very cultured individual, a noted author and  an expert on the works of Shakespeare.
The exact opening variation to appear in game 11 is a sort of accelerated dragon ( god, where do we chess players get these names!) with colours reversed, a very meat and potato type of opening, favoured by players who like long protracted games with lots of manoeuvring. 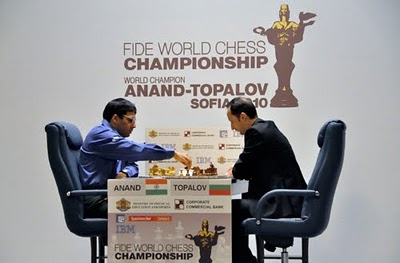 The fans were not disappointed!  Perhaps one or two spectators fell asleep during the first 40 moves….Anand got a typical Englishy position after about 20 moves, but refused to take any risks or undertake any ambitious plans.   Topalov , who admitted to be a bit surprised by Anand’s opening in the press conference, built up a rock solid position , but one with a lot of explosive potential.  Therefore the Indian  sought exchanges…
POSITION AFTER WHITE’S 30th MOVE
Topalov

Anand
Topalov has every single piece centralized and is about to begin active operations.  Anand, with his last move (30.Bb4) begins a series of exchanges to take the sting out of any ambitious designs that Topalov might have.  Seven moves later we find the position considerably simplified:
Topalov

Anand
Black has a slight positional advantage, as one would expect when one of the players prematurely simplifies and tries to make a draw.  In this particular case, however, Anand knew what he was doing.  While White’s b-pawn could be a permanent source of worry and quite easy for Black to gang up on –should Anand continue to play passively–the Indian played the ending with great energy and surprised many of the commentators!

As he stated in the press conference, at one point he chucked the b-pawn to get counterplay:  “To keep clinging on (to the b-pawn) didn’t seem attractive to me…it was enough (compensation)…(I felt) that I should be able to hold.”
The course of the game proved him right.  Topalov’s Queen-side pawns were easily held and Anand’s King-side majority drummed up enough threats to hold the balance.  Draw agreed in 65 moves.

The games are hard fought, though Topalov is the one usually with the initiative, taking all the risks and seemingly willing to play until King against King.  Anand seems to be in poor physical form, though he is putting up a much better fight than I had predicted.  I think losing the 1st game had a very positive effect on him: something of a cold shower at just the perfect moment.  It did not take long for Anand to equalize and then take a one point lead.
Topalov is in great physical shape, though he seems to continually find himself in situations where the games are destined to be long, tedious affairs.  Is there something wrong with his match strategy?  Or is it that he underestimated the Indian’s resolve to fight hard to keep his title?
A difficult call to make from the peanut gallery!  I await to see long interviews with both stars after the match is long over and both can look back in a more detached and objective manner.

So it comes down to game 12.  How much is Topalov willing to risk playing for broke in the last game?  This is the key question that both teams must be asking themselves this evening.  To play safe and then play poker in the rapid games–and  possibly lose in a silly fashion–is not the kind of story that Topalov would look forward to telling his grandchildren decades from now!
I think that Topalov will not play for broke, but he will go into the final game pyschologically prepared to play the game of his life.  That means that us spectators might be in for another roller coaster ride!  When was the last time a player died of a heart attack in a world championship match?  Never?  Well…there is always a first!
_______________________________________________________________________
As a last thought before finishing this article, I had a good laugh at chessbase’s express report this evening for the 11th game.  Unless gm Giri is writing the article (which is always superb, objective and wonderfully written), the express reports are some of the most biased stuff that I have ever seen!  Witness today’s report:
”Anand played a few exciting moves in the ending and tried to press for a win and once again the position became razor sharp as Anand tried to barge into Topalov’s territory with his King and pawns. However just when Anand’s King and pawn started closing around his King, Topalov advanced his passed pawn on the queen side to gain counter play. Seeing no headway, draw was signed …”
Are we talking about the same game? Game 11 ?  The game where Anand chucked the pawn so as to avoid clinging?  Where he activated his pieces trying to make a draw? 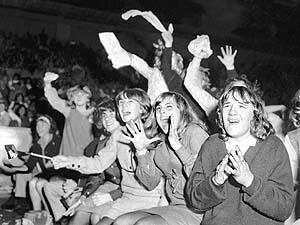 Fan clubs are all part of the fun!
But don’t get me wrong: I believe that chess is a sport, and as such I expect to see groupies,  hardcore fan clubs and home crowds going crazy.  Who expects objectivity whenever Chelsea plays Manchester United?  Still, chess is supposed to be more civilized….!?
SPRAGGETT ON CHESS
Share