The 2012 edition of the Magristral Ciutat de Barcelona is taking place right now and will continue until the end of the month.  As always, this is a real fighting tournament and much excitement is expected!  The standings after 3 rounds are given below:

The example I give below features the traditional Knight sacrifice on d5 in a popular line of the Sicilian Defence (Najdorf Variation).  Although weather-beaten by now, this sacrifice is always a crowd pleaser and usually creates hot discussions in the post-mortem:
POSITION AFTER 9 MOVES(!):
im FLUVIA,Joa

gm  AROSHIDZE
If Bobby Fischer were alive today, no doubt he would be proud that his favourite 6.h3!? has become one of the most popular sidelines to combat the Najdorf Variation.

Even after more than 50 years since its debut in top-class chess,  even though opening theoreticians are undecided as to its real merits, it continues to score points and, often, in brilliant fashion.

At the Varna Olympiad (1962) Bobby Fischer crushed Najdorf with 6.h3 in such spectacular style (24 moves!) that the next time they met Najdorf refused to play the Najdorf Variation, preferring instead a type of Pelican Variation! (He lost anyway!)
In the position above Black has just played 8…b4, forcing the Knight to make a decision:  retreat or be captured!  The young Georgian gm played the courageous Knight dive into d5:
10. Nd5! 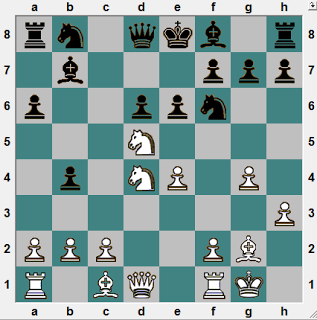 A Knight sacrifice on d5 is one of the most often seen sacrifices seen in modern chess!

Ok, maybe it hasn’t been played a million times, yet, but it must certainly be the most popular sacrifice in the Sicilian Defence!  Here the compensation is purely positional: Black will have some difficulty getting out of the centre with his King, and in the meantime Black’s pieces  will lack harmony.
10… exd5 11. exd5

There are similar sacrifices in the 6.g3 variation of the Schevenigen Variation.  White threatens Re1-ch followed by Nf5.    Note that White has auxillary themes of Nc6 and /or a3 (to bring the Rook into play along the 3rd rank).
11… Be7 12.Nc6!? 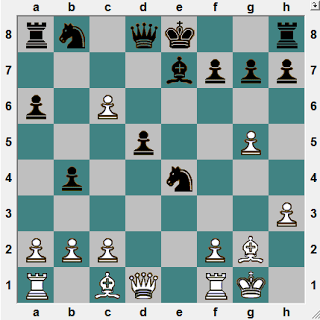 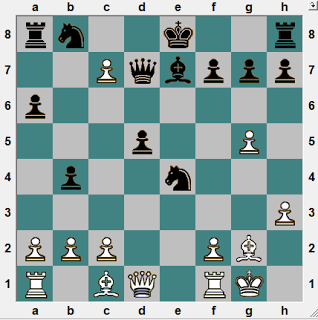 Black is busted!  The rest was , as Bobby Fischer like to say, just ”mopping up”!

BOGOSAVLJEVIC
From a team championship in Serbia just a few short weeks ago…Black seems to have everything undercontrol…each of his pieces defended atleast one time.
WHITE TO PLAY AND WIN!
3.
POSITION AFTER 23 MOVES:
gm  VUCKOVIC,B

VRATONJIC
From a team championship in Serbia just a few short weeks ago…OFCOURSE Black is busted!  But White must be praised for his energetic conclusion to this game!
WHITE TO PLAY AND WIN!