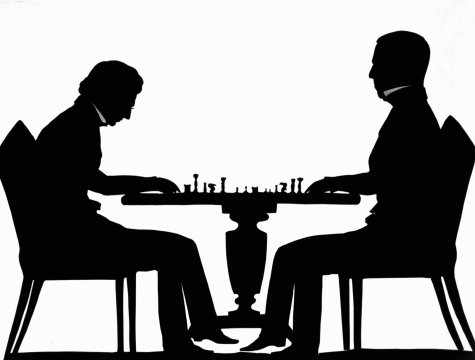 ”The silhouette (also known as a “shade” or “shadow”) was an inexpensive and popular form of portraiture from about 1780 to 1850. This example, depicting a game of chess, is probably by Auguste Edouart (1788-1861), a French emigre who cut his first silhouette in the United States in 1839. The players in this silhouette are The Athenaeum’s Librarian, William McIlhenney, Jr. (c.1779-1853), who was said to be passionately fond of chess, and his partner is George Spackman (d.1861), a fellow alumnus of The University of Pennsylvania.”   LINK

The World Cup in Tromso, yesterday.  The position after White’s 36th move.  It is clear that White is in trouble, his King wide open while his pieces stumble to shelter His Majesty from the active Black Rooks.  Areshchenko only need discover the most precise move order to end the game… 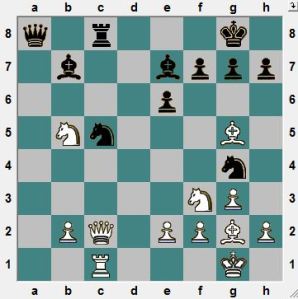 The World Cup, yesterday.  White had just blundered with his last move (18.Bg5), probably the result of nerves.  With this blunder, the Dutch star has the chance to clinch the match and move on to the 3rd round.

You are going to LIKE this!  At first I thought that this was from the playoffs the day before yesterday, but it has since been confirmed that it was played yesterday, in regular time control.  Both players are under great stress, and this helps explain the incredible blunders that took place.  Here we have the  position after 19 moves.  (Black’s last move was 19…Rh6, setting up some cheapos on h2)  Here White has a chance to win the game immediately!

INSTEAD, White did not see the win and played the cautious, but weak, 20.Rf2? 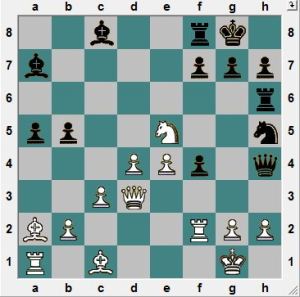 Now Kamsky has the opportunity to win the game!  Do you see it?  (Kamsky did not see it, and went on to lose the game…)

From the International Open in Figueres, Spain.  Yesterday.  Position after 28 moves.  A classical Queens Gambit Declined (X-change variation), it is clear that Black is on the defensive. White’s Queen, two Rooks and Knight can not ask for more active positions…even so, Black seems to have all of the hot-spots covered. 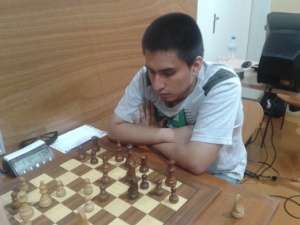 Cristhian Cruz, a young grandmaster living in Barcelona (and a member of my team EEBcn ) is having a great year and has scored some wonderful successes so far.  In this game he shows his considerable talent: 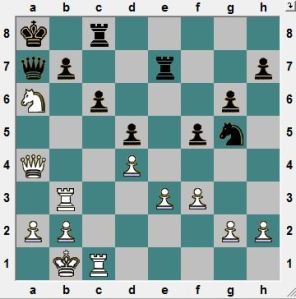