A good friend of mine, IM  Javier Sanz (Salamanca, Spain) runs the chess school shirovonline that incorporates  award winning software for the purposeof teaching chess on-line.  Javier has been trying to get me to become involved and start using this for teaching my students on-line.  I have to admit that I am very impressed! 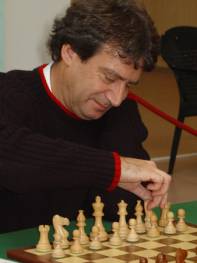 IM  Javier Sanz has twice won the Spanish Championship and now dedicates himself to the promotion of the chess school. ([email protected])
This technology does not require any downloading on the part of the student(s) and allows completely interactive participation between student and teacher.  It offers much flexibility: for example, it is possible to teach 20 or more students at the same time–they could all be in different places or in 20 different countries–and to also play tournament chess between them!  At the end of the session the software will automatically send to each of the students a .pgn file of everything that was taught (1-second after the lesson!).
Now that I have got the heck of it, I will soon advertise on this blog my availability to teach individually or in groups.  Think about it if you are interested!  Or let me know (or contact Javier directly) if you are interested in learning how to use this software for your own teaching purposes.
____________________________________________
THE ART OF CHESS
[youtube http://www.youtube.com/watch?v=ZqYeH0vkW68] 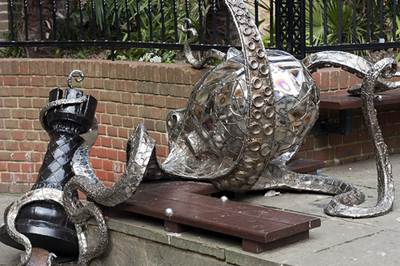 
MAGIC, HEROIN, SEX AND CHESS
Now there is a title!  Apart from the obvious shock value, it is always good for the promotion of the game of chess to be associated with sex and magic.  (I am less certain about heroin, however).  But believe it or not, this is serious stuff!  There is a cool video out called ‘‘Magic, heroin, sex and chess: the life of Leister Crowley”
The intro to this video goes:
Description: by Joel Shanahan through Professor Rev. Dr. James Kenneth Powell II, opensourcebuddhism.org. This very well-done project reveals the puritanical origins of the notorious Crowley, against which he strongly rebelled. His journey into the mystic arts, heroin use, chess, the occult and…Satan! All prove to be an excellent view for those wishing to know and see more of the scary yet so influential man of the early twentieth century!

Would a quick shag be completely out of the question?

Aleister Crowley ( 12 October 1875 – 1 December 1947), born Edward AlexanderCrowley,and also known as both Frater Perdurabo and The Great Beast, was an influential English occultist, mystic and ceremonial magician, responsible for founding the religious philosophy of Thelema. He was also successful in various other fields, including mountaineering, chess and poetry, and it has also been alleged that he was a spy for the British government. In his role as the founder of the Thelemite faith, he came to see himself as the prophet who was entrusted with informing humanity that it was entering the new Aeon of Horus in the early twentieth century.
(wiki)

Crowley (left) playing chess with Fernando Pessoa, a famous Portuguese writer
Ofcourse, if you are like me, then you may never have heard of the chess player know as ‘Leister Crowley”, and indeed a number of objections have been raised in the international chess community  as to whether he was merely an amateur player trying to inflate his reputation.  One such objection can be found at:
http://www.chessville.com/misc/History/PastPawns/AleisterCrowleyChessMaster.htm
The author writes:  ”Alright, let’s cut to the endgame: Who in the Devil’s name was Aleister Crowley?  And could this guy really push some wood or not?”  I recommend the reader to investigate…it is quite amusing!
[youtube http://www.youtube.com/watch?v=UwqlcHENd8I]

I have to confess that I had not taken a close look at this pdf newsletter before, having limited myself to a quick glance now and then.  But given that Tony Ficzere has been producing this monthly item for some time now, I felt that it was fair for me to actually do a critique on it.  After all, we are on a learning curve, aren’t we?
Most of my Canadian readers are no doubt well aware of the failing of the CFC since the re-structuring of the CFC (read: rapid garage sale of the CFC’s assets) to maintain a magazine.  I mean, the members actually pay for a magazine!  Part of the membership fee is to cover the magazine.

David Lavin (CFC president 2008-2009)
When Lavin was elected president of the CFC in the summer of 2008 he abruptly eliminated the printed magazine–without discussion– and replaced it with a so-called  ”e-zine”.  Ok, I have an open mind…maybe this is progress. The problem is, however, that the e-zine never materialized and yet the CFC continued to collect the normal membership fee, as though it was the most natural thing on earth.  Didn’t the membership have a right to a discount in their membership if they were not receiving a magazine… that they were paying for in the first place?
After some discussion, bickering and time-wasting by the CFC leadership, last year it was decided to create a pdf newsletter for the membership as a replacement for the magazine.  Tony Ficzere was put in charge, and he has been doing it ever since.  While it is certainly not a magazine, at least it is something.  Perhaps it is not what the membership is paying for, and perhaps not all of the membership is  infact currently receiving it, at least it has allowed the CFC leadership to sleep better at night that they were not  entirely ripping-off the membership in the process.
So fast forward to today…I took at look at the latest newsletter that appeared in my mail box.  My first impression was that it was bulky: 6 megabytes of space !  Something like 70-odd pages, plus pgn games.  However, as I flipped thru it, I have to say that I found it not as bad as Roger Patterson described it:  timing myself, I noticed that as 15 seconds passed my hand had still not approached the delete button!

Infact, even after 15 minutes I was not inclined to delete it!

First , let me congratulate Tony on his effort!  I found some things excellent and some things less than excellent…but I found NOTHING really bad, or entirely silly or out of place.  I think that the idea of putting in the rating lists is a good idea.  I think the idea of putting in a list of the CFC leadership (plus contacts) is also excellent.  Now the membership can contact those who are responsible…

What I thought could be improved on is the blurb on what the CFC is:

Is it too difficult to make clear that Canada is a founding member of FIDE (1924) and is a zone?  And what is this thing about 1964?  In this very same issue of the newsletter it is made clear that Canada sent a team to the Buenos Aires Olympiad in 1939–one of Abe Yanofsky’s games from that event is reproduced in full!  While the above blurb is not misleading or incorrect, it is inaccurate and omissive. An outsider is given the impression of a distorted timeline.


I also like the across Canada coverage and tournament announcements!  I think that any magazine (or whatever) that does NOT let the membership know what is happening across Canada is failing to fulfill one of its most important roles.  Tournament players need this kind of information. And some of the  games played in  recently completed tournaments is a welcome touch.

I found that there was a lot of filler in this issue, some of it borrowed from old ‘En passant’s.  Is this really necessary?  Day’s article is interesting but Cohen’s work is infantile ( no chess historian should want to display such subjectivity).  And the Masters’ Forum is a relic from the past!  In this day of large databases, to continue a practice from the 1970’s where  most of the fun is that the panel is supposed to be unaware of the players’ identities and then to guess their strengths, is just silly!

Besides, one of my own games is the subject of this month’s Forum and each of the panel no doubt knew that I played this game even if they did not look at their databases–the game had been previously published in several other magazines.

”These players have a solid strategic base, but limited tactical abilities (and inclinations) which is what makes the difference at the upper echelons of chess. I would rate these players between 2150 and 2300 CFC.”

In truth I was an IM with a FIDE rating of 2450 at the time! (CFC ratings then, like today, were inaccurate and at times laughable.)  On the comical side, the game was introduced by Tony as being an ‘old’ game.  I grant that any game played in 1976 may be looked upon as being old, but in this current newsletter Tony actually publishes more than just a couple of other games even older!

One final clarification before moving on:  Tony: in 1975 I became an IM.   And when you write about my achievements, not only do you omit that I won the Canadian Championship (open and closed) a zillion times but you fail to mention that I was twice a candidate for the world championship!  I point this out not for my own ego or sake, but instead to make clear that as editor you should want to inform and enlighten your readership.  Is it too difficult to be accurate?  To dismiss this as ”…he won a number of strong international tournaments throughout his career.” robs the Canadian reader of his chess heritage.

Finally, let me end on this item: why is my blog not mentioned in the list of Canadian Chess links?  I understand that I often criticize the policies of the CFC on this blog and this may appear to be unwelcome if you are an elected officer of the CFC, but the last time I checked Canada was a democracy and had a Charter of Rights.

My blog is the most widely read Canadian chess site on the web, and is also internationally respected.  I average daily more than 100 times the traffic than atleast one other blog that is mentioned in the newsletter! For many CFC members, my blog is the only real source of information on what is happening in Canadian chess politics.  Is this fair?  Does this make sense?

However, all in all, a fine job Tony!
Share