Kathryn Jacobs kicks Rachel Piersdorf
Looks like a scene from a church marriage ceremony where the priest asks if there is anyone present who objects to the marriage between ‘A’ and ‘B’, and then all hell breaks out!  Even the bride throws a few punches…
BUT no, the scene above is from a rehearsal by  Six Elements Company of Human Combat Chess, this past week at Universtiy Baptist Church (Dinkytown)  in Minnesota.

Human Combat Chess is played on a life-sized chess board, with competitors playing each chess piece. Kings announce their pieces’ moves, and the players move across the board as announced. When a square becomes contested, the two pieces then fight for the right to the space, using one of a variety of melee weapons. Fights continue until one combatant yields or is deemed incapable of continuing. The winner of the fight captures (or retains) the square and play continues. The match is complete when either king is caught in checkmate or loses in personal combat.
Human Combat Chess is the live action spectator sport for anyone who loves drama, action, swords, or chess!

If you are interested in knowing more (or maybe even attending) , then check out this link for more information.


HOW MUCH SLEEP DOES A GREAT CHESS PLAYER REALLY NEED?

YES, I know that I wrote a blog  just a few weeks ago about the negative effects of  lack of sleep on  chess playing, but apparently GM superstar Alexander Grischuk did not read it!  Or if he did read it, then he felt that it did not really apply to him.
Who knows, maybe he is right!  But for most mortals continued lack of sleep can  have bad effects on your game.  The frontal cortex is responsible for rational decision making and GM Nigel Davies wrote that ”…if someone is sleep deprived they’re simply going to play worse than usual.”
Incase you are wondering, Grischuk played a great game and won in fine style.  Proving that every rule has its exceptions…I give the game below.  The game was played just yesterday at the World Team Championship , in Ningbo , China.  Enjoy!
[Event “8th World Teams”]
[Site “Ningbo CHN”]
[Date “2011.7.21”]
[Round “5”]
[White “Adly, Ahmed”]
[Black “Grischuk, Alexander”]
[Result “0-1”]
[Eco “A68”]
[Annotator “”]
[Source “”]

My readers might remember  the blog article from several weeks ago that reported a rebellion at this year’s CYCC held in Toronto.  To recap: the organizers decided to give a combined total of  $18,000 in cash prizes to the top finishers of each section. (Bear in mind –by way of comparison–that next year’s Canadian Open will only give $15,000 in cash prizes).
The increasing distrust regarding the CFC leadership’s disposing of the CYCC’s past profits (and the total lack of  transparency and accountability in said monies) was no doubt a strong reason for this year’s organizers to take a stand.  More often than not, the CYCC produces profits: big profits.  In 2007 the profits were $54,000 !  Before then , in 2006, the exact quantity of profits was unknown because of some dubious book keeping by the notorious OCA duo Patrick MacDonald and Hal Bond. (The readers are invited to read the GLs to find out about how $16,000 dollars went missing!)

In anycase, simply giving the surplus money to 6-year olds can not be the correct solution!  In the chess world it is unheard of awarding thousands of dollars in prize money to children…. 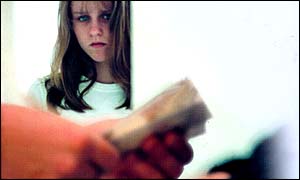 CHESS AND BASEBALL.  WHY NOT?