Did you wonder why there was no Empresa Montreal International Chess Tournament this summer?  Did the organizers forget about it?  Not enough money for it this year with the economy the way it is?  Lack of interest? Somebody died?
”No” to all the above! The real reason is scandal.  And in keeping with the fine Montreal chess tradition of burying the truth if it involves the hint of  ”corruption” amongst its organizers and associates, this scandal involving tens of millions of dollars went un-noticed…”enpassant” as it were… on Montreal’s favourite gossip rag, chesstalk.

The most successful run of annual international-calibre chess tournaments ever organized in Montreal– TIM-Tournoi International de Montreal– came to an abrupt end this past summer after 10 years of operation.  The reason: the principal sponsor–Luc Deguire–head of a company specializing in financial services (Groupe Empresa) has been found responsible for a wide range of illegal activities, including fraud involving tens of millions of dollars.

A recent photo of GM Mikalevsky(r) alongside disgraced Luc Deguire at a  TIM tournament.


The firms connected directly to Luc Deguire were fined 100,000 dollars.  Their registration was suspended,and Luc Deguire finds himself publically disgraced and possibly facing further legal problems down the road.

http://www.lautorite.qc.ca/pdf/Com-Radiation-Empresa-Deguire-A-2.pdf
Apparently, Luc Deguire had quietly amassed real estate valued at between 15 million and 50 million dollars while his financial services firm was busy at fraudulent activities.  According to one newspaper source, these properties will now likely have to be sold.
For those of you interested in reading more, here are some links (most in french):
http://www.groupempresa.com/index_.html
http://www.conseiller.ca/nouvelles/radiation-des-cabinets-groupe-empresa-et-de-leur-dirigeant-luc-deguire-25779
http://www.domainedeguire.ca/en/index.html 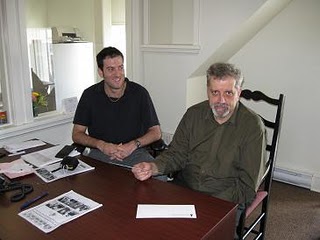 Andre Langlois(r)–an intimate associate of Deguire and the ‘face’ of the TIM– will likely go down in history as one of Montreal’s most notorious chess figures.
SPRAGGETT ON CHESS
Share