I.S. 318 Homepage
This junior high school in Brooklyn has been federally designated ‘Title I”.  Which means that traditionally more than 65% of its students come from homes existing below the poverty line.  From the outside  I.S. 318 seems like the typical school that late night TV programs like to portray as ‘lost causes’  And who can blame them:  in 2003 I.S. 318  was listed as a ”school in need of improvement.”
However, something extraordinary has happened  to I.S. 318 since 2003 .  Something so amazing that  I.S. 318 is today considered one of the best high schools in the city, and its students matriculate to some of the most prestigious high schools in the country.   What happened?
Chess happened!  The students of I.S. 318 discovered the game of chess…which is taught afterhours.The I.S. 318 afterschool chess program is an example of an innovative and accessible public education program that works.

The ‘winning-est’ school in American scholastic history!
The chess program has led the school to create a vibrant and varied afterschool program which John Galvin, assistant principal, credits with creating the “culture of success” at the school.   Todate, I.S.318’s chess team has amassed not less than 26 national titles!  They win nearly every tournament they play in – and regularly beat out schools, and other students, with a lot more resources. Despite being underfunded and underserved…

This is where the idea for  Brooklyn Castle  was born.  A small group of young film makers have undertaken a campaign with a duo purpose:  to not only try to increase support for chess and other expanded learning opportunitie (and  in doing so to engage audience members in this critical work across the country) but to especially draw attention to the extraordinary achievements of I.S. 318.    Brooklyn Castle follows five young teens for one school year as they struggle, grow and challenge themselves both on and off the chessboard.  At times things turn emotional as the chess team must face reality that despite their being national champions, they might become victims of financial cutbacks.  Brooklyn Castle looks at the challenges and triumphs of a champion public school chess team hit hard by budget cuts. 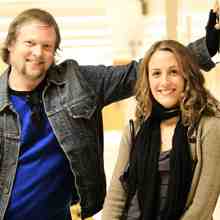 Brooklyn Castle is made by , Rescued Media, a Brooklyn based production company started by husband and wife team Katie Dellamaggiore (right above)  and Nelson Dellamaggiore.

FROM THEIR WEBSITE:
Katie is a documentary producer and director whose work has appeared on MTV, A&E, HBO/Cinemax and VH1. She has held various production and outreach roles on award-winning documentaries including 39 Pounds of Love, To Die in Jerusalem, 51 Birch Street and American Teen. Katie co-produced After the Storm, a nonprofit theater and film project that used art to revitalize the lives of young people in post-Katrina New Orleans, and directed, produced and shot UR Life Online, a documentary about cyber bullying, for A&E Classroom.
Nelson is a three-time Emmy Award Nominated Editor, most notably for Single Camera Editing on A&E’s UR Life Online. He was also nominated for his work on Super Bowl XLI and The Wizard at 95 for ESPN. He’s worked on a wide variety of formats, from MTV’s TRL to The Tony Awards and The Beijing Olympic Games. Nelson is a graduate of the University of Florida College of Journalism and Communications.
Katie’s brother Brian Schulz is Director of Photography/Producer. Brian is a three-time New York Emmy Award winning cinematographer for Major League Baseball Productions. As one of MLB’s lead cinematographers he is dispatched across the country to capture the game’s most dramatic images. His work behind the camera can be found in network promos and specials, World Series DVDs and the EMMY winning YES Yankeeography series. Brian is a graduate of the University of Connecticut.
It’s a family affair.
__________________________________
THIS IS WHERE YOU CAN HELP!

Almost two years ago, this initiative was launched with a $4,000 fundraising campaign which ultimately netted $10,536. Now the documentary is almost finished and once the final touches (animation, cutting, music, etc) are added Brooklyn Castle will enter into the film festival race.  BUT another $20,000 is needed to finish this project.

And for this the group is using Kick Starter  for its fundraising. Kickstarter is the world’s largest funding platform for creative projects. Every week, tens of thousands of amazing people pledge millions of dollars to projects from the worlds of music, film, art, technology, design, food, publishing and other creative fields.

This is not about investment or lending. Project creators keep 100% ownership and control over their work. Instead, they offer products and experiences that are unique to each project. On Kickstarter, a project must reach its funding goal before time runs out or no money changes hands. Why? It protects everyone involved. Creators aren’t expected to develop their project without necessary funds, and it allows anyone to test concepts without risk.
AS THINGS STAND OF TODAY, with 47 days left in the campaign, the group has raised a total of $1,930 from a total of 28 backers (donors). That means that another $18,070 still has to be found from generous and conscientious individuals who feel that this project is worth it.  Donations can be as little as $5.
I ask my readers to take a look at this LINK and find out how easy it is to make a difference!  Brooklyn Castle is worth finishing!   DONATE TODAY!
SPRAGGETT ON CHESS
Share