http://xadrez.nafigueira.com/paginas/abertura.php
The 7th edition of Portugal’s most important international chess tournament–Festival de Xadrez da Figueira da Foz–took place at the Figueira Casino between October 30 to November 7. With representatives from almost 20 countries, including 25-titled players, this event has established itself as one of the most prestigious norm-making tournaments on the Iberian peninsula.

The ultra-modern  Figueira Casino is the classy tournament site

The tournament organizers, Paula Costa and Miguel Babo (right) have considerable experience in putting on a classy show. I suggest the readers take a glance at the official tournament website (above) for videos and reviews of past editions.  Chessbase and EuropeEchecs normally give glowing accounts of this Portuguese event.

Chief Arbiter Carlos Dias
As one would expect for a tournament that has the best possible playing conditions, Carlos Dias is the principal arbiter.  Carlos is Portugal’s most senior Arbiter and he is also one of the most experienced and respected  arbiters in the world.

Paulo is also the webmaster of the great Portuguese website http://www.xadrez64.com/ , which is the best source of day to day chess activities, games and news in Portugal.  I suggest the readers to take a look at it! 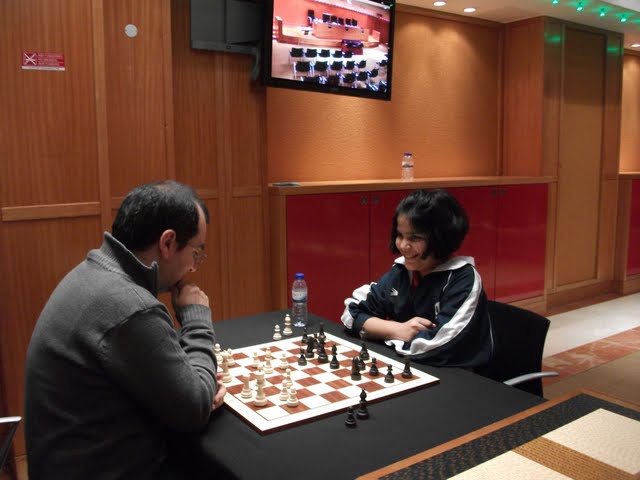 The event saw 8 (!) players tie for first place with 6.5 points from 9 games, including yours truly.  The tie-break system (drawn by lot) saw the Bulgarian GM Todorov clinch the championship title. Congrats!

Yours truly –chess player and talented chess journalist/blogger–can not complain about his final result even though he felt a bit unlucky with his 7th round defeat by GM Rotstein.  Somewhat out of form because of lack of serious practice recently, I intend to play 100 games in the next 8 months and this event was a good practice run.  Next year I will play in Sevilla, Gibraltar, Moscow and Cappelle, amongst others.

A photo of many time Portuguese Champion Luis Galego from an earlier round
I managed to play my best game in the last round,  defeating the number one ranked Portuguese player, GM Luis Galego, in an accurately played game.  The following position is after White’s 20th move (20.Nc6).  White has many threats , especially against the Black King (look at that Bishop on b2), and instead of risking a passive defence Luis sacrificed the exchange on c6.  Unfortunately for Black, White’s technique was sufficient to show that his slight material advantage was enough to win the game.  Take a look at the game in the pgn viewer below.
GM Galego

GM STETS
The Ukranian GM Stets is a well known attacking player.  The reader will remember his brilliant victory over GM Karjakin that I published on this blog several weeks ago.  Here Stets has his pieces all perfectly set up for a Kingside attack.  The problem is how to begin…

Also a strong continuation.  White asserts his domination  over the dark squares and fixes the Black pawn structure.

Stets now threatens mate beginning with Qxh7ch, so Black has no choice but to weaken his Kingside pawns

Black is holding on as well as he can, but Stets’ attack is unstoppable

White is attacking with every single piece he has!

The tournament organizer, Miguel Babo, is a great fan of the game of chess and has a lot of talent.  Just recently before the start of the Figueira tournament Miguel asked me to start a 6 month training program for him.  We got together for a couple of days and I outlined my ideas to him.  In Figueira Miguel really impressed me with his potential!   In the first round he completely outlplayed a 2550 GM (Mirzoev) and achieved a position where he could win in just one move!  And he had several strong masters busted later in the tournament also…the following game is (I think) Miguel’s best effort in the tournament.
POSITION AFTER WHITE’S 32nd MOVE (32.c4)
Miguel Babo

Jose Perez Negro
The critical point of the game.  Miguel has been steadily outplaying his opponent and now Negro takes his best chance: provoking a crisis in the centre, hoping that Miguel will not navigate the complications….if now 32… dxc4?! then 33. d5! is excellent for White
32… a5! 33. cxd5!

Philip Adams (Right) playing Alvaro Goncalves
Philip Adams and I have been keeping up with each other via the internet since I started this blog.  An avid chessplayer and retired languages teacher (who often corrects my english on this blog –thankyou Phil!), Phil and his wife–Anthea (http://antheaknowsbest.blogspot.com/) –took the opportunity to visit Figueira and enjoy the famous tournament.

I was surprised to learn that Phil and I actually play many of the same openings!  In the game below Phil gives a perfect demonstration of how to exploit an exposed center and attack the Kingside.  The game reminds me of a famous Portisch vs Ljubojevic game from the 1970’s.  Enjoy!
POSITION AFTER WHITE’S 29th MOVE (29.Bd4!)

For those readers interested in teaching Juniors, then you might find the following link very useful:
http://www.btinternet.com/~cccs.chess/ChessClubCoaching.htm
MORE PHOTOS

IM Paulo Dias vs GM Mirzoev in the final round

Tournament hall in the casino

The closing ceremony about to start (Miguel Babo at podium)