With FIDE elections slated later this year, it is curious that little public campaigning has been seen.  Is Kirsan going to remain President unchallenged?  I have heard of private efforts to recruit a challenger, but so far no one has taken the bait.  Has the financial crisis in the chess world lead to a meltdown of the morals of our democratic spirit and principles?
As we all know too well, ever since Garri Kasparov mistreated INTEL in the late 1990’s (INTEL wanted to renew its 32 million dollar contract with Kasparov’s PCA, but Kasparov did not want to meet INTELs condition of having a single World Champion)  corporate sponsorship won’t touch chess with a 10 km pole.
Kirsan entered the scene in 1995, hoping to re-vitalize FIDE.  The result has been catastrophic.  Efforts of trying to portray a professional face in its efforts of seeking sponsorship have failed miserably.  First FIDE COMMERCE failed.  And recently GLOBAL CHESS has bit the dust.
Mark Weeks explored what happened to GLOBAL CHESS.  Could it be that all of this embarrassment  is kept silent because this year is an election year?

The Rise and Fall of FIDE’s Global Chess

G.Borg. Best intentions amount to little
• 2007-06-24: Tallinn Presidential Board Maps New World Chess Championship Cycle • ‘FIDE Presidential Board has approved the introduction of a new Grand Prix series initiated by Global Chess as part of the new World Championship Cycle.’
• 2007-08-08: FIDE Vice President and CEO of Global Chess BV Geoffrey Borg’s interview • ‘We have officially launched a company called Global Chess, which has the primary objective of commercialization of chess as a sport and improving the overall marketing image of chess’ (long)
2007-08-20 Global Chess BV office opened in Amsterdam 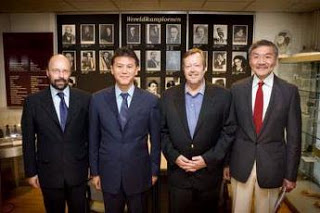 From the Press Release of 2007-08-20: Borg, Ilyumzhinov, Kok, Orlov(?)
• 2008-01-14: Agreement between Global Chess BV and Turkish Chess Federation • ‘CEO of Global Chess BV Geoffrey Borg and President of Turkish Chess Federation Ali Nihat Yazici signed an agreement for cooperating on developing new web technologies, improving the design and the content of the FIDE web site.’
• 2008-03-20: FIDE Presidential Board Meeting in Istanbul • ‘Geoffrey Borg of Global Chess confirmed the participating cities of the Grand Prix circuit and the PB requested that contracts will be finalised in time.’
• 2008-05-30: Global Chess CEO Geoffrey Borg on Chess Sponsorship • ‘Geoffrey D. Borg, CEO of Global Chess BV (the marketing arm of FIDE) made a presentation titled “Chess Sponsorship” upon the invitation of Is Bank, the main sponsor of the Turkish Chess Federation in the second International Sports Marketing and Sponsorship Congress” held in Istanbul, Turkey on May 28.’ • This appears to have been around the time that Kok left the organization.
• 2008-06-10: Chess Giants – Yerevan, Republic of Armenia • ‘FIDE Commercial Director and Global Chess CEO Geoffrey Borg outlined also the plans that FIDE had for the next couple of years for women chess and other world class events and how Global Chess was assisting in the development of chess.’

Mark Weeks, again from the same website as above, on January 13 published the following excerpted from the minutes of the 2009 Executive Board. It concerns discussions on the fate of Global Chess and on its successor.

[…] The FIDE President [Ilyumzhinov] took the floor and said during the discussion of Global Chess there was a very important issue raised about sponsorship in chess. During his report he did not touch upon this issue as he was talking about two other main problems: popularisation of chess and joining the Olympic movement. He was glad that this issue has been raised now. First, in fourteen years FIDE has not broken any of its commitments and all FIDE events have been organised for the chess community. We organise all the tournaments which we declare. All these years we have been trying to commercialise chess and find some other sponsors.

Campomanes: a legend in the chess world
Today we recalled Mr. Campomanes who has done a lot for chess, using his own personal relations and connections, and who has brought a lot of investment and sponsorship into chess, including his own country for Karpov-Korchnoi match for example. And now he was continuing this tradition of Mr Campomanes by bringing in his personal friends and political connections among leaders of various countries. This allows FIDE to organise many chess events in respective venues. He had been also trying to create a system, which would be independent from him, which would not need the President and would create sponsorship and invest into chess. In order to create such a system, he had been investing from his own pocket into chess and this is his personal sponsorship of the chess movement.

Total failure!
For fourteen years FIDE has not taken any risk. He was the one who was risking with his own money. He was trying to find large scale business men who would invest into chess with him. The first effort was the creation of FIDE Commerce in London with Mr. Tarasov. We opened an office in London and we organised quite a few events. The expenses totalled to 4 mln USD, but this effort failed as FIDE Commerce did not bring any extra sponsorship. We closed FIDE Commerce and Mr. Tarasov still owes him around 500,000 USD.
Then we tried in Turin, after his personal discussion with Mr. Kok, where it was decided to create Global Chess, where 99,9% belonged to him and only one share belonged to Mr. Kok. He took the obligation to pay all the funds to Global Chess, in order for this company to attract other sponsors. He transferred the amount of 2 mln euro from his personal account to the account in Holland. We have all been witnessing the activities of this company. Global chess was supposed to find potential investors in Europe. He personally participated in negotiations with many companies, alongside Mr. Kok. As a result, we did not organise any tournaments in Amsterdam, Switzerland or Prague.

Therefore, as the main shareholder, he had decided to close Global Chess BV and he announced this officially at the Presidential Board meeting in Krakow. Nevertheless, he was grateful to Mr. Kok for his cooperation. He found it fruitful cooperation. He did not have any personal reservations against Mr. Kok. FIDE did not lose any money either, but it just cost him another 2 mln euro which he had spent for chess from his own pocket.
Mr. Ilyumzhinov said that as for the amount of 250,000 euro which was mentioned during the discussion [owed to FIDE by Global Chess], we should not forget the six Grand Prix tournaments, which have been organised for men, and four women’s Grand Prix. This is additional revenue for FIDE from its share of the sponsorship. In addition there were stipends for principals and all FIDE members who participated in the tournaments. He thought that in two years Global Chess did a lot for popularisation of chess by opening new schools and bringing new personalities and new leaders of countries as friends of FIDE.