Leonxto Garcia
Spanish journalist Leonxto Garcia (Irun,1956) is exceptionally well known in the spanish-speaking chess world, and has been for more than 25 years.  He has a chess column in El Pais, the number one daily newspaper in Spain.  Whenever there is some big tournament happening somewhere in the world, you can expect to find Garcia showing up and doing interviews and taking pictures.  (I seem to recall seeing Garcia  when I played Yusupov in the Candidates in the winter of 1989!)
He even has his own fan club!  http://clubdefansleontxo.blogspot.com/

Leonxto also has a great deal of influence on public opinion, his opinions always being measured and insightful.  In the March issue of Jaque , the number one  chess magazine in Spain, Leonxta wrote about the coming FIDE elections and especially about Karpov’s candidature. http://www.jaque.tv/

In this important article Leonxto expresses his hopes that Karpov will help change and cleanup the image of FIDE from one of an organization wasted by years of wide spread corruption and graft.  He wrote: ”The news of Karpov’s candidacy is indeed welcome  given that FIDE’s image has fallen so much in recent years and is too often associated with incompetence and corruption.”

He continues    ”Despite the rumours of his involvement in the secret wars of the KGB during his matches with Korchnoi and  Kasparov , Karpov’s reputation and prestige has not stopped growing and today his popularity is immense.”
Garcia  is of the opinion  that ”Karpov would make a much better president of FIDE than Ilymumzhinov”
Leonxto, however, clarifies that there are still some honourable individuals in FIDE and that specifically  Ilymuzhinov ” is not the worse one in the FIDE leadership.  Many of the top players in the world today are unanimous in pointing the finger at Giorgios Makapoulos and Zurab Azmaiparashvili as the principle culprits.” 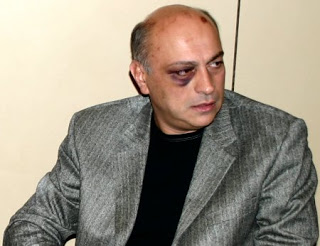 Azmaiparashvili (left) and Makrapoulos (right) are both thought by many in the chess world to be using FIDE only for their own personal profit, hanging on to Kirsan’s coat tail .
Leonxto finishes his article ” I would like to think that Karpov will not stoop to the shameful practices that have become the rule in FIDE in his quest to gain votes, even though I ask myself if it is even possible to win the election without this…I also want to believe that Karpov will not promise to give important positions in FIDE (should he be elected) in exchange for votes.”
Leonxto’s final wish is that should Karpov succeed in winning the FIDE election ”that Karpov will clean up the name of FIDE sufficient enough to attract sponsorship back into chess.”

______________________________________________________________________
Meanwhile, the FIDE election continues with surprisingly little information made public.  The intrigues of the Russian Chess Federation (RCF) that I wrote of last week has alerted us all to an on-going internal war in the RCF that would have made  cold war hawks blush!
Mark Crowther wrote on the 28th of April  (http://www.chess.co.uk/twic/chessnews/politics/bitter-fight-over-the-russian-nomination-for-fide-elections) at his popular website TWIC:
”Karpov claims that Ilyumzhinov is trying to get the Russian nomination by “hook or by crook”. and also pretty confident that the letter supporting Ilyumzhinov is not legal. (Press Release 23rd April 2010 on Karpov’s campaign site). This same press release raises the possibility that Ilyumzhinov may be ousted as Kalmykian President in October too.
Karpov believed he had been promised (or even has the right) that the formal decision will be taken at a meeting of the RCF Supervisory Board on May 14th where there would be a vote of all 32 members of the Russian Regions. It seems now that this meeting will be the moment we know for certain who will get the nomination. ”
Crowther goes on : ” Karpov is apparently to be hauled in front of a FIDE Presidential Council on July 22nd in Norway in order to explain comments that Ilyumzhinov’s record in Kalmykia brings a trail of corruption to FIDE. Although quite why they’d want to give him the opportunity to list the huge number of allegations that have appeared in the Russian media is anyone’s guess.”
CLICK ON TO ENLARGE

http://www.karpov2010.org/
While all of this is going on behind our back, the Karpov campaign team is not wasting any time seeking publicity  and seems to be organizing a series of glitzy cocktail parties and fundraisers .  Earlier this week a VIP-chess party was held at Moscow’s trendy Marusya Bar and Restaurant.  And on May 17 another is planned at the classy Trump Soho Hotel (see advertisement above).
CLICK ON TO ENLARGE

As you can see from the advertisement from Karpov’s campaign website, Kasparov and Carlsen will attend.  Those amongst my readers who live near New York and have between $250 and $1000 dollars to spare should probably look into attending!  Who knows what other celebrities will show up (Paris Hilton!?).

I sort of wonder about the direction that the Karpov campaign is taking with this high profile paparazzi approach, and what Karpov really expects to get from this in his fight to get 3rd world votes.  Certainly few from the middle east, africa or the Asian-Pacific region would be interested in a candidate who seems more interested in jetsetting than visiting them.  And Ilyumzhinov’s strength is in the 3rd world, where he still wields enormous influence.  Should Karpov get every vote from the Americas and Europe, it will still be a drop in the ocean…. 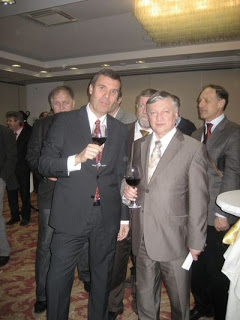 From the grapevine I understand that rumours are beginning to circulate of a possible alliance between Silvino Danailov and Karpov!  Karpov is scheduled to show up in Sofia sometime in the coming days.  As you know, Danailov is running for the presidency of the European Chess Union.

I personally hope that Karpov’s campaign will never associate itself with the controversial Bulgarian promoter. As a friend said to me, ” Let’s keep life simple: the good guys on one side of the line, and the bad guys on the other side!”

Ofcourse, as pointed out, very little of the actual meat and potatoes that one would normally associate with a presidential campaign has been made public.  Possibly the stall in the RCF actually coming out and supporting one of the candidates can explain this, but I am beginning to sense that this election is not going to be as open and above board as we would all like.  Let us just hope that Leonxto Garcia’s remark about Karpov not trading positions in his executive (should he be elected) for pre-election advantages…should not be more than that.