SPRAGGETT ON CHESS
On my blog on August 18 of this year, I introduced the readers to award winning author Rowena Cherry and her science fiction romance novels that incorporated chess as a theme; each of 4 her novels had a chess-related title! http://www.rowenacherry.blogspot.com/
Today I introduce Michael Weitz, a talented writer and and his first attempt at serious writing http://www.michael-weitz.com/Welcome.html 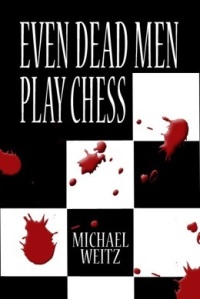 ”Michael Weitz cleverly crafted his debut novel by creating an unusual method of murder not used in mysteries. You are grabbed from the first page.”
Robert Berryhill Book Reviews
Blurb from the back cover:
Making house calls or meeting people in public places is how Ray Gordon makes his living. He’s not a doctor. He’s not a prostitute. Ray Gordon is a chess teacher. When one of Ray’s students, Walter Kelly, is found dead in his shop, the police and his family let it go as an accident. Ray, however, doesn’t buy it. As a former cop with a lingering curiosity, Ray snoops around and stumbles into the murky world of methamphetamine, the worst drug epidemic of our time. 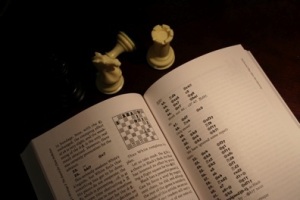 About the Author:
Michael Weitz grew up in the Pacific Northwest. usually reading anything he could get his hands on. He wrote his first novel in the 6th Grade — an eight page rip-off of Star Wars. A variety of jobs including waiter, gas station attendant, truck driver and a host of others, helped shape his world. After college he landed in the television industry where he wrote and produced a multitude of award-winning commercials, two documentaries about Mt. St. Helens and various other projects. Michael is an avid chess player, and student of the game. Now in Phoenix, married, if Michael isn’t writing or editing his latest novel, he might be found reading, playing chess or shooting pool with his league team. As an avid photographer, he enjoys traveling anywhere.

”My dad taught me how to play chess when I was in third grade and I was instantly hooked. Maybe it was the shape of the pieces, the medieval quality of the lines or maybe it was the sheer depth of possibilities the game held. I still don’t know exactly why I was, or am, so smitten with the game, but I expect I’m not the only person to have been taken in by its charms.”
”Chess has been around for thousands of years and has been compared to art, mathematics and science. In other words, chess is much more than just a game. You don’t even have to be very good at the game to enjoy it.”

”Like art, you don’t have to be able to mold clay or apply paint to a canvas in order to experience it, like math you don’t have to be able to master calculus in order to appreciate it or study every “ology” there is to understand the laws of physics (among other scientific fields).”
”Chess is something anyone can enjoy, study and learn from, but never master. And I’m the perfect example. I love the game and I’ve played in many tournaments. How did I do in those tourneys? Let’s just say I had a lot of fun.”
”If you want to learn more about chess, I encourage you to check out the
US Chess Federation for more information. Or type it into your favorite search engine on the internet and see where the world of chess can take you.”
SPRAGGETT ON CHESS
See also  Memories of Fischer vs Petrosian 1971
Share