This tournament is what chess is all about!  There has been some extraordinary chess played so far.  Showcased today is Nisipeanu vs Reinderman  from the 3rd round.  Enjoy it!  It is certainly one of the best attacking games played this year.

The Romanian star’s 3rd round game against Grandmaster Reinderman was nothing less than magnificent!  The student of Misha Tal has learned well  not only how to attack (like his master!) but how to create excitement among the spectators and public.  This pretty game has already been published in many magazines and on dozens of websites since it was played earlier this week, and I am certain that it will be included in many fine books, still to appear, on the artistic appeal of our noble game.
POSITION AFTER WHITE’S 8th MOVE (8. Qf3)

I have never been a big fan of Alburt’s  line (4…g6 5.Bc4 Nb6!?), but who am I to judge  chess tastes?  All I can profer is my humble opinion that …it is not to my taste!  In anycase, we have before us one of the critical theoretical positions in Alburt’s line.

This is the difference: White e pawn is defended with the Knight on f3, while maintaining the threat on h6

11… Nc6!?  Black must respond quickly in the center or he will risk being run over

However, to be fair, I think  the truth is that Black is gambling a bit in the Alburt variation, and that the best Black can hope for is a well-timed blunder by White!  In such a case, the Alburt variation would be quite attractive…
13… Nd3!? This is new, and appears to be approved by chess engines.

But to us Homo Sapiens, it seems incredible that such a greedy policy can have any chances of success when all of White’s pieces are on top of Black’s King!  Surely White’s attack is worth more than an exchange!?
14. cd Bxb2   So if White takes Black’s Rook, Black will capture the White Knight

Despite the chaotic nature of the position, Nisipeanu pursues the logical course and completes his developement.
15… Bxa1 16. O-O

Forgive me for making the all too human observation that despite being an exchange up, Black’s  undeveloped Queen-side must be an important factor when evaluating the position objectively

White can still not take the Rook on f8 because Black takes the Knight on g5
17. Nde4!?

The critical moment of the game.  None of the commentators had noticed that White can now win simply enough with the artistic 18. Nh7! Threatening Bg5, against which Black must soon bow his head:

This tempting move is good enough to give good chances to win, but is certainly more tedious than the above mentioned alternative.  And besides, White must now play perfectly in order to win!


RETURNING TO THE GAME, INSTEAD OF TAKING THE KNIGHT ON F7,  BLACK MAKES WHITE WINNING CHANCES MUCH SIMPLER WITH A HORRIBLE MOVE
18… Qd7?

Black can not exchange on e3 because it would open the f-file for the attack!
19… Kxf7

Now 28. f4 would be the most precise, and Black would probably have resigned. However, Nisipeanu’s road to victory is just as sweet!
28. Qxg6  Ke7 29. Bxg7

Ofcourse, there is no way that White will exchange Queens!
30. Qh6

The Black King is floating about in the centre, while Black’s Queenside pieces are still in the same  position as before White’s attack began!  That must say something…
30… Nd5

Black loses his Queen . He resigns. An extraordinarily complex position to play over the board!  Black never got the opportunity to develop his Queen Bishop!
[1:0] 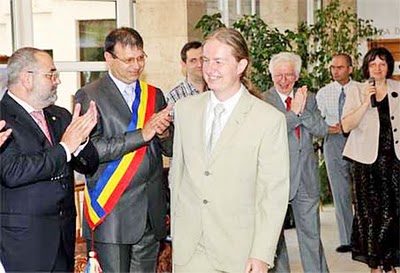 After such a performance, a standing ovation!  What else?