http://ecc2010.chessdom.com/
The European Club Cup is presently taking place in the Bulgarian city of Plovdiv and has attracted many of the world’s top rated players.  There is a separate competition for women, no doubt the logical result of a boom in interest in women chess in recent years. The men’s competition is referred to as the ‘open‘ competition, as it might include one or two female participants, and is the primary focus of interest and prestige of this club event.
OPEN COMPETITION
(top 100 players) 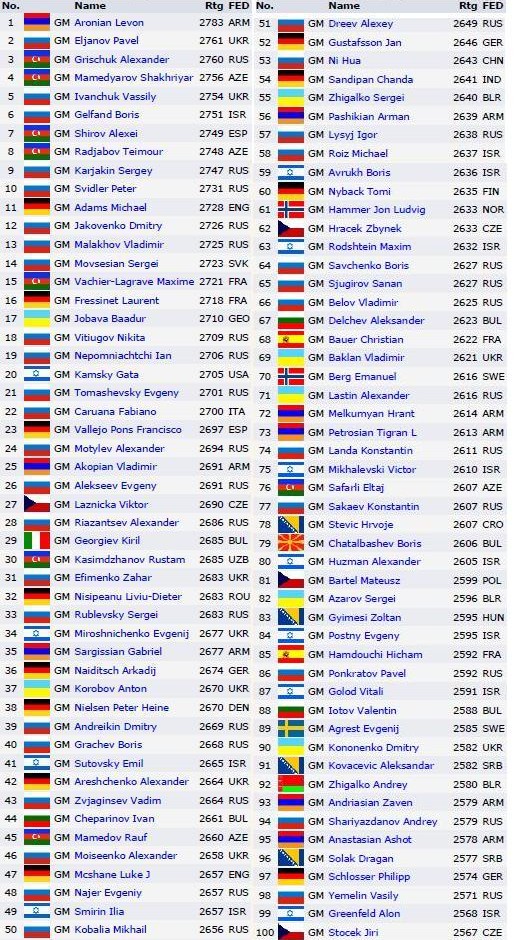 According to the regulations, each European country member of the ECU (European Chess Union) may participate in this tournament.  Depending on how well developed and organized the club championship is in each country, 2 or even 3 clubs may participate from that country.
Ekonomist SGSEU Saratov (Russia), is the current cup holder in the men’s competition, while  Spartak Vidnoe (Russia), is the current cup holder in the women’s competition.
The highest rated team is SOCAR  (Azerbaïdjan) ,with an average rating of  2732 Elo. The players include: Mamedyarov, Grischuk, Shirov, Radjabov , Vachier-Lagrave, Rustam Kasimdzhanov, Mamedov and Safarli. That is some team!

Vachier-Lagrave
Black’s position is horrible: the 2 Knights do nothing, the Queen is out of play and the King position is wide open and just waiting for the axe to fall.  The young French grandmaster does not miss his chance:
32. Bxg5! hxg5 33. Rxg5 Kh8 34. Qg6!?
Good enough, but perhaps 34. Bc4 Qxf3 35. Kg1 is quicker

MAMEDOV
Black’s threat (29…Qa1ch) means that White must probably take on f7 and exchange 2 Rooks for the Queen.  However, in the resulting ending it is not clear if White would be able to make any headway because Black’s position is just so solid.  And playing 29.Rxd6 cd6 30. Rd3 is answered very effectively by 30…Na5!    WHAT DID WHITE COME UP WITH?
29.Qa4!!   Brilliant!

Black is worse but not dead.  Here he should consider 12… Ne7!?, and after  13. Nxc6 Qb7! 14. Ne5 Qxf3 15. Nxf3 c4!? he would have a lot of fight left in him despite the pawn deficit.  Instead, probably feeling depressed, Black jumps from the proverbial frying pan into the fire:

Now what happens to Black is gruesome.  I recommend readers with a sensitive stomach to not watch the rest…

A precise move designed to increase Black’s torment.  Objectively best is now 15… Ke8 but after  16. Qxa8 ch Kd7 17. Nd2 it is completely depressing.

There is nothing quite like developing a Knight that also threatens mate in 1 move!

Why should Black also not join in the fun?   If instead 17… Qb4 18. Nc4! looks convincing enough.  I suppose Black’s idea is that if White captures with the Queen then Black exchanges Queens and survives a lot longer.

It is mate next move!

The 2010 British Champion, Mickey Adams, proved that he is in top shape today, cleverly exploiting a tiny error from his less experienced rival. Adams is probably the very best player in the world in ‘cat and mouse’ chess…

ADAMS
A typical Spanish Opening position.  Not much is happening; Black has to worry about b5 and d6; White has to find a way to out-manoeuvre (cat and mouse) Black so that he can make something out of it!  I evaluate the position as being only slightly better for White.
Black should sit and wait, intelligently, anticipating a long and protracted struggle.  Instead, Black misplaced his Bishop with 26…Bd8(?) and this gave Adams the opportunity to spring on his opponent with the surprising 27.c4!  See the pgn viewer for happened next!

White has an obvious positional advantage and a sacrifice on e5 is begging to be made!  Alekseev does not disappoint…the 2 White Bishops soon become dominating.

Here Alekseev misses a relatively quick win with the ironic 36. Rd1! Nxd5 37. Qxg5! when White has serious chances to deliver mate!  However, White’s move is also good enough to keep a big advantage, though it now becomes tedious work.

And White went on to win….See how the game went in the pgn viewer below!