I love Eddy Izzard!  What a pleasure to play over his youtube excerpts of his always sold-out concerts!  Who could have guessed that the genre of ‘transexual-comedian” would become popular?  Enjoy the video below, just one of many entertaining tidbits of Eddy Izzard… 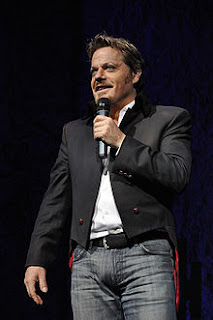 He had a starring role in the television series The Riches as Wayne Malloy and has appeared in many motion pictures such as Ocean’s Twelve, Ocean’s Thirteen, Mystery Men, The Cat’s Meow, Across the Universe, and Valkyrie.
He has cited his main comedy role model as Monty Python, and John Cleese once referred to him as the “Lost Python”. In 2009, he completed 43 marathons in 51 days for Sport Relief in spite of having no prior history of long distance running.