Dvorkovich’s influence in Kremlin near end?

SPRAGGETT ON CHESS
Under Medvedev’s presidency Arkady Dvorkovich became a key economic adviser, and then again ,when Putin became acting president last year, he was appointed a Deputy-Prime Minister , following  Medvedev’s transition to Prime Minister’s office.  For the past several months there have been rumours of Dvorkovich’s impending resignation due to growing tensions between  Putin and Medvedev.  Things have come to a head this week when Putin’s guards prevented him attending a working meeting at Putin’s Sochi retreat.

My regular readers no doubt recognize Arkady Dvorkovich as a chess player.  His father was a well respected International Arbiter.  Arkady is also currently a director of the Russian Chess Federation , and readers can find blog-articles about his performance in this capacity here ,here and here .

Dvorkovich playing in a simul against Kramnik
According to the Moscow Times on Tuesday  , Dvorkovich downplays the incident with Putin’s security guards and even claims it never took place.  He further insists that he has no intention to leave Medvedev’s side before 2018 when his term of office ends.
“I knew that I would have to work six years, if I worked well and wasn’t fired,” Dvorkovich said, adding that he wouldn’t leave by his own will.  (Cited from yesterday’s Moscow Times)
But sources close to the Kremlin suggest  the possibility of  a more rapid exit by Dvorkovich.   Vladislav Surkov  , once a key Putin adviser and considered the third most influential political figure in Russia after Putin and Medvedev until his changing camps over to Medvedev, was removed from office just two weeks ago, allegedly for annoying Putin.  He was a Deputy Prime Minister, like Dvorkovich.

The charismatic Surkov with his equally charismatic wife, Natalia.
According to Reuters  ”Russian media and political analysts have long said a rift has opened up between Putin and Medvedev, his long-time ally and a former president, although both deny it. “Of course it’s a strike against Medvedev,” said Dmitry Oreshkin, an opposition-minded political analyst.  “It turns out he was simply devoured. It will take some time and the prime minister will also be devoured.” 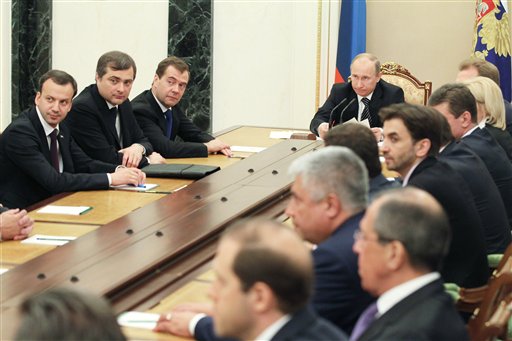