GM KARPOV
This position arose after Black’s 27th move in  Karpov’s game against the Portuguese GM Antonio Antunes at the Tilburg international chess tournament in 1994.  Antunes has been playing quite solidly and has achieved a more or less equal position. Not much is happening here and neither side is threatening anything.  Further,  Black’s strong Knight on d6 and control along the d-line fully compensate whatever weaknesses he might have on the Queenside.

Clearly Karpov’s idea is easy to understand: he wants to play 29.Rc8 , picking up the Queen if it was him move immediately.  Antunes therefore played 28…Bf8?? and after 29.Rc8 Qe7 30.Qa8 Karpov developed a stranglehold on the postion and won in 40 moves.  (See game in pgn viewer below)

It was only discovered in the postmortem that Karpov’s 28th move was a terrible blunder that should have cost the game  had Antunes played the very simple 28…b3! (diagram,right)
Karpov can not reply with his intended 29.Rc8 because 29…bxa2 and Black emerges a Rook up!  So Karpov would have to play 29.axb3 and after 29…Nb4 and 30…Nxc2 he would find himself an exchange down with the worse position!
The dynamics of ‘blundering’ would make an interesting theme for a book (I know of several published articles on the theme!) , especially since it is such a common occurence in our play, regardless of what level one plays at.  Clearly in the case of this game , Antunes did not even allow himself to entertain the possibility that such a great player as Karpov would allow a shot like 28…b3, so he did not even bother to take a few extra seconds to check to see if Karpov had blundered.  As a result, a life-time opportunity to defeat the ex-world champion slipped unnoticed thru his fingers.
There is no moral to this story: but it is worth drawing to the reader’s attention what the great Tartakower once wrote:  ”If you don’t know what to do, do nothing.  Wait for your opponent to do something: it is bound to be wrong!” 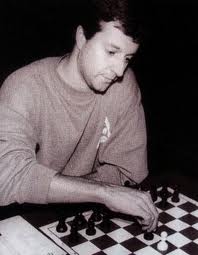 GM Antonio Antunes (born 1962, Portugal)
Retired from competitive chess since 2000, Antonio was officially Portugal’s first GM.  A tough competitor in every sense of the word, he has defeated many top GMs in tournament play, including J.Polgar.  Today he is happily married with (with a Cuban chess player !)  has a number of children and is a successful stockbroker in Lisbon.
SPRAGGETT ON CHESS
Share