Dominguez and his winning ways

The Cuban star Dominguez has apparently learned how to play against his fellow colleagues in the so-called ‘supertournaments’.  In yesterday’s matchup against the Russian star Svidler  in the Greek Grand Prix, the Cuban saddled his opponent with several pawn weaknesses and then waited for him to go wrong…

Whether the evidence is that Svidler over-estimated his chances at some point,  or simply under-estimated his Cuban opponent, is irrelevant.  The truth is that winning games against very strong adversaries –especially those who are armed to the teeth with specialized opening preparation–is a very difficult task.

The subject of how to defeat players who are your equals is little studied. One pragmatic approach, introduced  into modern tournament chess by the great Emanuel Lasker, is based on psychology: help your opponent to beat himself! 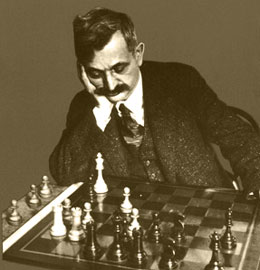 When the struggle is as much off the board as it is on the board!
POSITION AFTER WHITE’S 9th MOVE (9.a3):
gm  SVIDLER

gm  DOMINGUEZ
A  popular line this year, with Svidler having played it already 3-times : against Carlsen (London Candidates); against Anand (Alekhine Memorial) and against Adams (also Alekhine Memorial).  Svidler beat Carlsen, drew with Anand and lost to Adams.
It is normal for grandmasters to repeat lines where they have had relative success. Against Carlsen and Adams he chose placing the Bishop on b7.  Against Anand he put the Bishop on e6, which is how Svidler played against the Cuban:
9…Be6  10.Nd5!?  Nd4!?  11.Nxd4  Pxd4  12.Nxf6+ PxN 13.BxB PxB  14.a4!?

Still following Svidler’s game with Anand…
Objectively,  the position is probably balanced but there is a lot of play left–especially for White..  Black’s pawn structure has been slightly compromised and his Bishop is relatively inactive.   White, on the otherhand, has absolutely no weakness and has a position that is unassailable. As well, White has a 4-3 pawn majority over on the Kingside…a subtle factor that can often generate play for White.
Svidler, willing to repeat his experience with Anand, obviously believed in Black’s game.  But why he would willingly accept to play a position where all of  the negative elements belong to him–and only him– and  where he had absolutely no chances to win, possibly indicates a less than objective evaluation of the position…
It should also be noted that  the Anand game at the Alekhine Memorial, was played in the penultimate round  when probably both players were a bit drained.  Anand had scored 2.5/3 of  his last couple of games and an ambitionless draw actually  improved his tournament ranking!
14…Qd7!?  15.b3!?  c5 16.Qg4

Dominguez’ approach here to handling the position is different from Anand’s. The world champion exchanged on b5, opening the a-file.  The Cuban apparently wants to keep Black guessing as to when–or if–that file will be opened.

Neither side wants to exchange the c4-pawn, waiting for the other to do so.  Here, should Svidler play the sold-looking 21…Rf8, then 22.Qe2! will follow and Black must make an uncomfortable decision on the Queenside.
In this position, playing passively with Black is NOT the right way to proceed.  White has f5 (or e5) ideas ready whenever he wants.  Therefore Svidler decides to play more aggressively to keep White busy
21…Ra2!  22.e5!?

Whether he wanted it or not, a crisis has been forced onto Svidler
In this kind of situation the Black player MUST play pretty close to perfect play to avoid getting the worse of it.  Wrong would be 22…Pxe5 23.Pxe5 as opening the f-file is immediately winning for White. Instead, 22…d5 allows the strong continuation 23.BxB QxB  24.f5!  when 24…Rxc2 loses immediatley to 25.Ra1!, and the relatively best 24…Pxf5  25.Qxd4 is uncomfortable for Black.
Apparently Black could take the pawn on c2:  22…Rxc2!  23.Pxd6 Bd8!  and analysis shows that he can just about hold things together, though there is a lot of danger lurking in the resulting position and you need really strong nerves to play this way.
Svidler opted for the loosening 22…h5?!  23.Qh3  d5 (Dominguez later criticized this move) 24.BxB  QxB  25.Qxh5!?  ( 25.f5 is even stronger and gives some real winning chances) 25…Rxc2  26.Ra1

The back rank is big problem. Here Black must play the cold-blooded 26…Qf8! and he should be able to hold the game with accurate play.  INSTEAD, he played 26…Qb7?!  and soon found the position too much to handle.  Svidler resigned on the 36th move.
The curious thing , when one takes a look at the analysis of this game, is the complete lack of winning chances for Black at every turn.  White is risking ABSOLUTELY nothing…it seems as though Black underestimated the problems he might get into when choosing this opening variation.  After his initial win over Carlsen, Svidler  has scored a mere half point out of 3 games in this same opening variation.
Whenever one side must play perfectly and the other needs only play reasonably well, the winning odds can become significant.  Lasker understood this idea very well a long time ago…and Dominguez applied it successfully in this game. 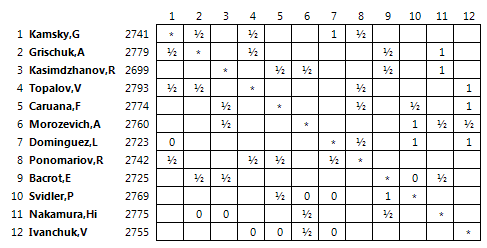