Dark horse from US wins U18 World Youth

It is always inspiring to read about success stories where years of hard work and dedication are finally rewarded.  I certainly had never noticed 17 year old FM Steven Zierk (from San Francisco) before now.  But winning the U18 World Youth in Greece has made the fiesty high school student a front page news item in the US.  Zierk is also a 2nd degree Black belt in Tae Kwon Do.  With his chess title, Steven gets his first GM norm.

A very satisfied Steven Zierk after his historic achievement in Greece! This is the second time in three years that the world under-18 champion has come from the San Francisco area, as IM Sam Shankland pulled off the same feat in 2008.  Difficult to explain why, but clearly something works very well in the chess community in the Bay area!

http://www.mercurynews.com/los-gatos/ci_16494924?nclick_check=1
By Julia Prodis Sulek
When Steven Zierk was just 8, he was called a chess prodigy, a child whose talents at calculations and competition were beyond his years.
Around his hometown of Los Gatos, the shy little boy with spiky blond hair was known as “that chess kid.” Expectations were endless. How far could he go? Would he stick with it?
Well, now, a decade later — and after a five-year hiatus that crushed his coach and relieved his mother — the 17-year-old Los Gatos High School senior has stormed back with a world championship gold medal he brought home from Greece over the weekend.
“It’s huge,” he said Monday from his family home, where his mother and two younger sisters had filled his room with 300 gold balloons. “I went in expecting just to play, to do well. The Top 10 was my goal. So obviously, it’s a great surprise.”
On Monday, he wore around his neck the medal he got for winning the under-18 category of the World Youth Chess Championship sponsored by the International Chess Federation. He entered as the 26th-seeded player and competed against young players from some 80 countries. With the medal came the title of international master, one step below grandmaster, which he hopes to earn before he goes to college next fall.
His coach, Michael Aigner, of Davis, was also surprised at the big win.
“I was happy to see a talented man back,” said Aigner, who first coached Zierk when he was 7. “I was beginning to wonder how quickly he could catch up with the people who were his rivals five years earlier. And the answer is he’s caught up. I’d say with this win, he has surpassed them.”
Despite the expectations from years ago, there was no telling whether he would return.
Not long after the Mercury News ran a story about him in 2001, his ratings flattened out and “I lost interest,” he said.
For those five years he pulled back, rarely competing.
“It just got to be too much for him. There were a lot of tournaments, three-day tournaments, two games a day that can last four or five hours,” Marina Zierk said. “He finally said one day, ‘I need to back off of it.’ “
His coach was devastated that this talented boy could simply quit. But his mother welcomed the respite.

“He spent more time on tae kwon do,” she said, and he earned a second-degree black belt. “He did more math and math competitions. He was looking around and seeing what he wanted to do.”
When he was 15, the allure of chess returned. He was always competitive by nature, and when he saw the ranking surge of a New York kid whom he used to beat, he told his father he wanted back in.
On a chess website, he and his old coach reconnected.
“Hey Michael, I’m playing again,” the online note from Zierk to Aigner read.
“That’s when we started our lessons,” Aigner said.
And the teenager was still an excellent player. “He will calculate unusual moves and find a way to make them work,” Aigner said. “And he has a really strong determination and will not give up even if his position is quite bad.”
In Greece, Zierk won eight matches and tied three to win the championship, where some 1,000 players competed shoulder to shoulder in several age groups. Since the winner of each category is chosen based on cumulative scores, Zierk didn’t have to defeat the runner-up in a tense, championship showdown match. He had played the second-place finisher, Samvel Ter-Sahakyan, earlier, tying the Armenian teenager who is already a grandmaster.
Zierk handily won his final match in two hours, but Ter-Sahakyan’s continued for at least two more hours. Since spectators aren’t allowed to crowd the tables and disturb the players, Zierk joined his father in their hotel room and followed the Armenian’s play by play on the tournament website. His father called it “pure torture.” When Ter-Sahakyan lost his match, “we started cheering,” the teenager said. 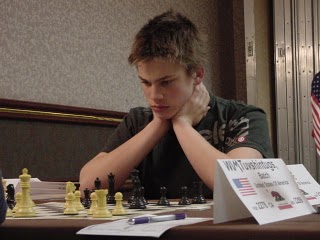 At home, Zierk is an exceptional math student, a kid who reads through his math books the summer before school starts. He has completed all the college-level math courses his high school has to offer. He has taken up weightlifting.
Zierk has been teaching chess to younger players as well. One of his students, 10-year-old Cameron Wheeler, of Cupertino, was also invited to the Greece tournament and won fifth place in his age group.
Zierk is “a big strong kid with a big heart,” said his father, Jon Zierk, a marketing executive who taught him chess as a child. “I got a lot of compliments of how he supported the other kids on the U.S. team. I couldn’t be prouder.”
Now if he could only get his son to complete his college applications.
A career in chess earns a living only for “the very, very best,” the younger Zierk said. He’s considering a career in computer science, and has given thought to working for the National Security Agency one day.
The teenager has been awarded a scholarship to the University of Texas at Dallas after winning a chess tournament in Southern California. But he is also considering applying to MIT, Princeton, Duke and Cornell, among others.
“I’m going to put this on my application,” he said of his championship. “It should be something of a bonus.”
____________________________________________________________________