http://www.coruschess.com/
This annual, long standing, chess tournament is being held between January 16 and January 31 in the Dutch town of Wijk Ann Zee.  There are infact 3 grandmaster tournaments  held simultaneously , as well as some amateur tournaments, the result being that  for several weeks each January the entire chess world has its eyes on this great chess festival.
Games begin at 13:30h local time (15:30 Moscow, 12:30 London, 7:30 a.m. NY), except for the last round on January 31st, which begins at 12:30h. There are three rest days, on January 20th, 25th, and 28th. For all three groups the rate of play is 100 minutes/40 moves + 50 minutes/20 moves + 15 minutes + 30 seconds/move.
PRINCIPAL GM TOURNAMENT AFTER 4 ROUNDS

The top group always attracts the most media attention  as well as the vast majority of the  public’s interest.  This year the Norwegian Carlsen (currently ranked number one in the world) is participating, as well as the Indian Anand (the current world champion).  For the first time that I can remember, there is more interest in the top rated player than in the world title holder!

World Champion Anand.  The title not worth as much as before because of FIDE politics
With Kasparov in the background,  playing the unusual role of second of Carlsen, the chess media seems to be trying to turn the event into some sort of an informal crowning of Carlsen as the heir apparent of the world chess kingdom.

Kasparov and Carlsen in a chess training session in Croatia.  More flash than substance? The future will tell…
It appears that the people behind the Norwegian Mozart have been on a media blitz aimed at making Carlsen a household word (like Mozart ?!).  He may already very well be one in his own country, but the rest of the world is a tougher act to convince.  Time magazine did 2 pieces on the youngster just a short while ago, while Chessbase has elevated Carlsen’s status to bigger than life.
Naturally, grandmasters Anand, Shirov, Kramnik, Ivanchuk, Karjakin, Dominguez and Nakamura (just to name a few of the other super-egos in the chess world ) have been relegated to standing in the shadow of Carlsen  and, predictably, they  don’t seem  too eager to want to play into any orchestrated marketing  fairy tale romance.
The result  is that the tournament is extremely hard fought and completely wide open.  It is almost impossible to predict who will win! 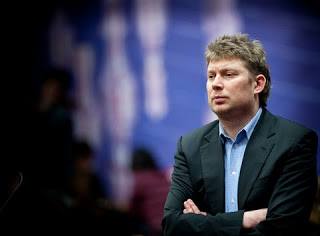 Is Alexy Shirov going to win the tournament this year?  My money is on him!
Alexy Shirov is in the lead after 4 rounds with a perfect score, a full point ahead of a group of 3 GMs!  Alexy is well known to Canadian players, having visited Canada on numerous occasions.  His chess has so far been pretty much the same high quality as usual, but with the difference that Alexy is trying to win all of his games.  No doubt Shirov wants to win this tournament, and in a big way!
My impression of the games so far is mixed.  There are certainly a lot of positions being arrived at on the board, after 20 moves or so,  that are just home preparation by both sides, with the predictable results (lots of draws).  But there is also some improvization and risk taking, maybe even a bit more than one has become accustomed to see in these super-tournaments.  I suppose that, this being the first big tournament of the year, most of the players are well rested and eager to begin what they hope is going to be a big year for them…
There is also a fair amount of weak chess being played, unforced errors and games ending with blunders.  Case in point is the game that I present below, where Ivanchuk’s Dutch opponent, Van Wely, simply walks into an opening variation that is a known forced loss!  Van Wely simply did not do his homework…

The sharpest variation agains the Najdorf Defence.  It is difficult for me to understand why 6.Bg5 is less popular today than 6.Be3: the resulting positions are much more interesting and , despite 50 years of analysis, have not been any where close to being worked out.  Infact, 6.Be3 is more worked out than 6.Bg5!  I suppose bad taste and fashion might be the explanation…!

The idea of Qe2 is very simple: White prepares castling long and at the same time lends support to the e5-pawn push.
This  very strong move  has received , surprisingly, very little attention from the theoreticians.  I believe it was David Bronstein who first played it in a serious game , at the Petropolis interzonal in 1973 against the Romanian grandmaster Gheorghiu. Despite winning a brilliant game, Bronstein’s idea was relegated to the heap of lesser played alternatives!

David Bronstein (1924-2006) One of chess’ greatest talents of the 20th century.
I am one of the very few grandmasters who has included Qe2 in his opening repetoire.  Infact, if I may be so bold, I am probably the world’s leading authority on this line! I have won many brilliant games with this idea.  But the real credit for my faith in Qe2 belongs to my brother-in-law, Antonio Ferreira, who extensively analyzed and investigated this variation some 25 years ago when he was a law student at Coimbra.

Antonio wrote down  his ideas and analysis in several notebooks that I today keep in my library in Guarda.  He had first seen the move Qe2 in the above mentioned Bronstein game, and Antonio was instantly attracted to its aggressive and direct nature.
When I first arrived in Portugal some 20 years ago, Antonio tried to convince me to include Qe2 in my opening repetoire, but I was a bit reluctant.  Then about 7 or 8 years ago I took a second look at the line and did some of my own analysis and investigation.  The result is that I not only started to play it in my own games–with great results– but the analysis of this variation was privately passed on to several of the elite grandmasters in the world (Shirov and Radjabov, amongst others) and they started to play it!
Such is how theory develops.  In anycase, the game I am showing here (Ivanchuk vs Van Wely), which was played yesterday in Corus, can be found in one of Antonio’s notebooks written a quarter of a century ago!  The whole game is, infact, just a footnote!

Black seeks counterplay on the Queen-side.  He threatens …b4, chasing the Knight

This move costs White a tempo (stopping the immediate …b4), but is infact the best way to build up White’s initiative.  Fischer wrote that chess is all about timing, of knowing when to duck and when to strike.  The move a3 is such a move.

This move and …Bb7 are interchangeable at this point.

It must be noted that the famous Bronstein vs Gheorghiu game continued 10… Rb8?! 11. Nd5! (diagram, right)
A typical sacrifice in the Najdorf, and in this position particularly strong! The game continued 11… ed 12. ed Be7 13. Nc6 Nb6 14. Bxf6 gf 15. g3 Bb7 16. Nxb8 Qxb8 17. Bg2 Qd8 18. Rhe1 and White had more than enough compensation.  He went on an won in 36 moves.
Bronstein later wrote that he thought that the sacrifice was playable, but with correct defence should not lead to more than a draw.  However, my own analysis has considerably strengthened White’s attack and I am of the opinion that Black suffers no matter how well he defends!

Black wants to open the b-file, a typical theme in this sicilian.

A logical move, preparing Rhe1 and e5, amongst other things.  My own analysis indicates , however, that 12. Bh4!? (with the idea of g5, and dropping back this Bishop to g3 or e1, depending on what Black does) is the strongest move.

White is better developed and the Black King is stuck in the centre.  Sometimes Black can get away with this, but not here.
14… de 15. Nc6!  Ouch!

15…Bb7   Van Wely improves on the defence, but by little

An exchange up for nothing and with the better position, Ivanchuk must have been enjoying himself here!  Black’s apparent counterplay is purely optical: a few spite checks.  The game continued:
17… Bxc3 18. ef gf 19. bc fg 20. Bxb7 Qxb7 21. h4 !

Ivanchuk does not relent.  The Black King will not find peace if he should head to the Kingside.
21… Qc7 22. hg Qxc3

Black resigns.  He can still play a check or two, but to avoid mate he will have to fork over the house.   An easy victory for Ivanchuk.
Share